U is for Ubiquitous 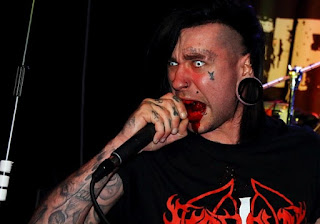 Hailing from the Midlands of the UK, this four piece band produces noisy, angry music featuring higher pitched screaming, as well as growling. According to one source they "deliver an angry and energetic fist to the face of the listener." - ouch!

The band members use stage names: Typhoeus (drums), Belial (vocals and bass), Abaddon (vocals and guitar) and Baphomet (vocals). To satisfy your curiousity, Typhoeus was the most deadly creature of Greek mythology, Belial is a Hebrew name for the Devil, Abaddon is the biblical Angel of Death, and Baphomet is the goat-headed idol of occultism. A charming mob, I'm sure.

Combining elements of death, black and melodic death metal, Ubiquitous have a new album (their sophomore album) which was just released at the beginning of this fine month of April. It's called Ad Portas Inferi which is Latin for The Gates of Hell.