Memories of our Big Hearted Dog

Taz was a four month old Labrador cross Maltese pup when he joined our family in 2001. James and I built him a doghouse, but he wouldn't go in, much less stay in. He slept against the back door, as close as he could get to us during the night, and there were plenty of sleepless ones for me as we tried to settle him into his new home. Alana wouldn't go into the backyard without me when she was young because she was afraid of Taz' enthusiasm. It was one of his most endearing qualities. 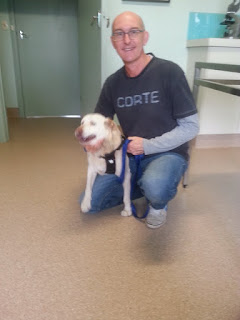 He bounced and jumped a lot, and craved affection. You couldn't get him to stay still, and you couldn't make him angry. He never got angry until Dr Jekyl and Mr Hyde (a Shitzu we named Gizmo who had the personality of a cat) joined the family some years later. Taz was all about love and affection and tolerance, even though Gizmo pushed him over the edge quite a few times.


He was not a smart dog, but he had a big heart. As old age and in particular arthritis, slowed him down, his increasingly frequent trips to the vet resulted in praise for the strength of his ticker. Sadly the rest of his body, his legs, ears, and eyes could not keep pace. His bouncy greetings became mere attempts at bouncing.

Taz had a hacksaw breathing pattern when he became excited which was so loud you could barely talk above the din. Sitting around wasn't really his thing, so he was always excited except when sleeping.

This evening he went to sleep for the last time. James, Alana and I were there at the vet to say goodbye, although I couldn't bring myself to say anything. I just ruffled his fur one last time and walked out.

I haven't lived with Taz for some time now, and although I missed my furry friend, I knew he was there out the back of the house, happily living his canine life.Now I feel like another piece of me has just been broken off.
Posted by DA Cairns at 11:29 PM 2 comments:

Celebrate the small things: waking up

Every night when most people go to sleep, they expect to wake up the next morning. This pattern, and the use of X number of hours to rest and recharge our bodies, is something that most of us take for granted. The average person, getting an average amount of sleep, will spend roughly 25 years of their life, tucked in bed, basically unconscious.

Last night, I did not sleep well. I eventually crashed around 1am while watching an episode of Supernatural, but woke up several times through the course of the dark hours. Each time I fell asleep, I dreamed. I had three dreams, and all of them were bad. Nightmares. Allow me to briefly recount my disturbing nocturnal imaginings.

1. I was at a family function to celebrate the first birthday of the most recent addition. The child was hideous, but everyone cooed over it. I saw another child, a toddler, and recognized him as my son, who is now 20 years old. The child, my son, and I began to play funny face games with each other, but I knew he did not recognize me, so I had to run away as my tears began to fall.

2. I was in a field which had recently been harvested of its crops. I had purchased a roasted corn cob, and was eating it when I began to feel unwell. As I stumbled down the field toward the fence at the roadside, I noticed the adjacent field was scorched. I fell to the ground, and saw a number of half eaten corn cobs, and some other rotten vegetables. Picking up one of the half eaten cobs made me vomit continually.

3. I was taking my dad to a doctor's appointment at the hospital. On the way, I met a Thai lady whose name I could not remember although her face was familiar. She was beautiful and spoke sweetly to me. She disappeared, and my father and I got lost trying to find the doctor's room. We ended up outside, and as we continued to walk, he became breathless and weak. I helped him along the street, hoping to find the doctor, but he said he could not go on and he collapsed on the grass beside the road.

I believe these dreams are all significant. They speak to things going on in my life, and reflect my subconscious mind fretting and despairing even as I try to put on a brave face and soldier on in my waking hours. I know exactly what these dreams mean. I'm very glad I woke up.

The reality of my life is not as extreme as these dreams and for that I am thankful, but if my sleep life is to frequently feature such bad dreams, I would rather stay awake as long as I can.

When have you had a bad dream, and been really happy to wake up?

A few thoughts on submission guidelines I have been writing and submitting short stories for many, many years. It is a time consuming  process to find a suitable market, read their guidelines then conform to them. The requirements of editors are quite varied, and some of them are especially picky. Not that I am critical of that, but it can make the task of getting published more difficult. I've lost count of how many rejections I have received, how many times I've read the words 'thank you, but your story is not a good fit for us' (or something like that), and how many editors have simply never responded.

My message to you as a writer is: do not be discouraged. If you love to write, then persevere, and if you have any talent, you will find some rewards; not to mention the satisfaction of pursuing your dream or your hobby, or whatever it is that writing is to you.

Many of my stories which have been published were rejected multiple times. Despite all the submission guidelines hoopla, all you are looking for is an editor who likes your work. It's that simple really. It was the same deal when I completed my second novel, Loathe Your Neighbor, and was looking for a publisher. I wrote 66 query letters, and received nothing but rejections and no responses, until Jeanne Haskin at Artema Press, said yes. Why? Because she liked my work.

As I said, if you are any good at this art form, then for sure there will be people who appreciate what you do. The truth is that you actually don't even have to be that good. You can be pretty good, work hard and get lucky too. Everyone needs a bit of luck to be successful.

Getting back to short story submissions, here's my advice:
Photo source for 'I love Writing this much"
http://www.thedutchphdcoach.com/writing/how-do-you-feel-about-writing/
Posted by DA Cairns at 2:10 PM 1 comment:

Square Pegs has always had two goals: to express myself on any matter I feel so inclined, and to advertise myself and my work. Unabashedly, I say to all that I want more readers. More readers of my blog, and more readers of my works of fiction; both my short stories and my novels. It is very difficult to break through all the competition. I have been attempting for many years to escape the deep, dark forest of anonymity. I've tried numerous methods to increase my exposure, to raise my profile, to become famous.

However, despair and
envy can be strong motivators, and for me they are. My determination swells like a tsunami, so today I am celebrating one more mustard seed: the advent of Square Pegs E-Zine. The latest and potentially greatest in a long line of grabs for fame. A little e-zine which may produce enormous success.

There are fifty quintillion online short story magazines, so what hope has another of becoming successful? Square Pegs E-Zine is different. Firstly, potential contributors have to join/follow my blog. Secondly, payment for publication is a PDF copy of one of my novels, and finally, submission guidelines are available in a short video. (Ironically, Duotrope refused to list Square Pegs E-zine if it only had video submissions guidelines, so I had to put them in text as well.)

Let's see how this latest attempt to reach the glorious heights of fame and fortune goes. Wish me luck!
Posted by DA Cairns at 2:35 PM 4 comments:

Alas, I must return to work on Monday after a three week break, and so it is with some disappointment that I report on the non cooperation of the weather with my holiday plans.

We went to Auckland for New Year's Eve, and spent a couple of days there sightseeing...in the rain. Yes, it rained the whole time. On our return home we found the weather had followed us, so we had three more days without the sun. Keep in mind, it is summer Down Under and yours truly likes to hit the beach daily during his Christmas/New Year vacation.

On Friday the sun came out, so I headed for the beach, but it was closed due to dangerous conditions. Sure the sun was shining and a light breeze was blowing. It would have been perfect except for the fact the lifeguards had put up the no swimming sign. Undeterred...okay I was slightly deterred, I traveled further south to another beach. Imagine my joy when, upon arrival I found the same beach closed sign.

I stood and pondered the awful cruelties of life, and while I was feeling sorry for myself, the lifeguards zoomed out across the beach in their little sand buggy, and erected those beautiful red and yellow flags which declare to all that the surf is ready to receive swimmers. On my way in to the crisp rolling waves, I thanked the lifeguard for opening the beach just for me.

2016 looms large as a potentially great year for my career according to the Chinese horoscope, or so my partner assures me. Across the Margin published my short story Capricorn Moon on January 6, so I'm off to a good start. Lovesick is resting, waiting for the first round of revisions, and I have commenced my next project which is a supernatural thriller. As for going back to work on Monday...I can hardly wait. I love my job!

May 2016 be an outstandingly successful one for you, both personally and professionally. Do you have any particular goals or plans?
Posted by DA Cairns at 2:25 PM 2 comments: