Rock band, Live released their 6th studio album in 2003. Called Birds of Pray, and featuring the hit single Heaven, it remains one of my favorite rock albums of all time.

With such clearly spiritual themes, I have wondered, and still do, about where exactly this band is on the faith spectrum. I'm very much a lyrics focused listener. The music is one thing but the deeper meaning of the words has always aroused my interest. Many artists have important things to say about themselves and the world around them. By reflecting and exploring issues and themes, they have the gift of being able to provide revelation and inspiration to others through their songs.

Live's song Heaven, is a stirring statement of faith which strikes exactly the right chord with me.

I don't need no one, to tell me 'bout Heaven.
I look at my daughter and I believe.
I don't need no proof,
when it comes to God and truth,
I can see the sunset.

People often talk about good things or experiences as being 'heaven on earth', or 'heavenly', and bad ones as 'hell on earth' or 'hellish' without really believing that either place actually exists. Earth is real while heaven and hell are fantasy places, invented by various religions to provide incentives to piety.

Earth is a mixture of heaven and hell. People who believe that this life is as good as it gets, are, in my opinion, deluded. I agree that there are wonderful things on earth, but there are some truly evil, horrible things as well. Things which make us despair and long for a better place.

Evidence is required for many to believe in Heaven, and it is true to say that  many who say they believe, make liars of themselves by their actions. What proof is needed? And what proof will be acceptable when the weight of evidence already before us is overwhelming?

The second part of the the above chorus alludes to Paul's statement in the book of Romans, in the Bible. Creation itself continually testifies to the glory of God. I can see it everywhere, and my soul wants more; it cries out for an end to suffering, it yearns for peace.

The conception, birth and development of my children has always filled me with wonder and gratitude. Even now, as older teenagers, their lives still sing an amazing song about the beauty and glory of Heaven. I don't need any more proof. I look at my daughter and my son, and I can see the sunset...and I believe. Do you?

In Red Foo's most recent and insanely fun dance song, he calls everyone to ridiculousness. Why don't we? What prevents us from going a bit crazy and dancing extravagantly or laughing our heads off? Why are we are so restrained by our inhibitions and repressed by the scary prospect of being judged by others as stupid or weird? Why can't we let go? Why do we stay in the trenches and never rush over the top?

I watched The Internship last week, and aside from thinking that it should have won an academy award for  perpetuating cultural stereotypes, and for destroying itself with two particularly cringe worthy scenes-if you've seen it, think dance club restroom and nursing home- it made me wonder why people are all so understated.  Apart from celebrities, from whom bizarre behaviour and appearance is expected, and characters in movies or television shows, there are very few larger than life characters. Most people keep a lid on themselves.

The ridiculous, exaggerated and farcically comical words and deeds of people in films and on TV shows is largely absent from our everyday lives. Why? When was the last time you Tom Cruised around your living room in your underpants? Or made love slowly, like Demi and Patrick in Ghost? Or stood half naked in the rain with your hands held to the sky a la Shawshank Redemption? Or celebrated victory like Steve Martin in Parenthood? When was the last time you laughed so much you couldn't stand up?

Are all the great highs of our lives only experienced vicariously through films, televisions, and books? Is outlandish behaviour only for entertainment purposes, or should it be used as an expression of gratitude and liberty?Are we really living or just passing the time?

Here's my beef with Supernatural's portrayal of angels.

There is an angel called Joshua (left) who is the only one who talks to God, and as he points out, it is mostly him talking because God doesn't have much to say. Another angel called Zachariah plays tricks on people, and manipulates them and calls them offensive names. He gets angry when he doesn't get his own way, and he keeps on talking as though only he speaks the truth when his actions belie his words.

Castiel (right) rebelled against Heaven, because he has a soft spot for the Winchester boys. He looks confused most of the time, and at one point was searching for God but has now conceded that God is gone and He doesn't care. Gabriel disguises himself as a demi-God and torments people for his own amusement. Anna became human and had sex in the back of Dean's car before becoming an angel again. And let's not forget Lucifer (below right) who is roaming the earth now, footloose and fancy free.

I could go on, but all this proves is that what I am watching is complete fantasy. Wow! What a revelation. I know it's fiction, but before the apocalypse story line, I could distinguish between good and evil in Supernatural. Castiel was a 'good guy': a fearsome solider of Heaven, for example. That's what post modernist story telling does; it blurs the lines between good and evil. Supernatural's angels are all nearly as bad as the demons.

I prefer my angels like they are in Touched By An Angel. They speak God's truths into people's lives, they protect them, guide them, counsel them and encourage them. They demonstrate real love and at the same time, obedience to their father who sent them. They are not morally ambiguous, and they don't hurt people or cause trouble. 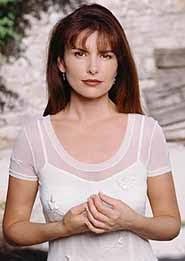 Assuming you also believe in angels, which kind do you prefer. Which do you think is closer to the truth?

Although this mini series on angels has captured the imagination of the world, it is time to move on. I'd love to hear your thoughts on angels.
Posted by DA Cairns at 1:44 PM 2 comments: