M is for Mortal Soul

For some reason there aren't many African metal bands. I only 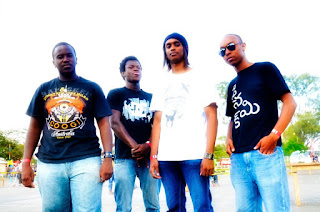 found three to include in the A to Z. Mortal Soul are a metalcore band based in Nairobi, Kenya, and this instrumental track, Solace, has been running around in my head for weeks now. I love it. It is from their debut EP called Ashes in the Wind which was released in 2013.

Mortal Soul, who have been likened to Bullet for My Valentine, are Leon, Pete, Joey and Celeste. They got together in 2010. On their Facebook page they list their musical likes/influences, and five of my fave bands are in the list: Bullet for my Valentine, As I Lay Dying, Creed, Trivium and Metallica.

In 2001, I was staying in a motel in Newcastle, NSW, to where I travelled fortnightly for many years for work. I usually stayed in the same hotel, but for some reason I stayed at the Sovereign Inn in Mayfield on this occasion: one and only. They had music channels in their pay TV arsenal, and I was channel surfing when I hit one of them and saw a band which knocked me out.

In 2001 this band released their breakout, and most commercially successful LP to date, Satellite. The song I saw on that video channel was Alive. I soon owned a copy of Satellite, and now have every record they've made. To say I love POD, is a gross understatement.

Email ThisBlogThis!Share to TwitterShare to FacebookShare to Pinterest
Labels: a to z blogging challenge, A to Z of heavy metal, Kenyan metal, Mortal Soul, solace