G is for God Damn 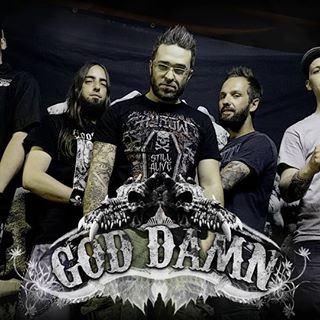 They've released two full length albums: Old Days (2009) and Back to the Grindstone (2012). Other than this sparse information, I can tell you nothing more. They don't even have a wikipedia listing. According to their Facebook page (last updated late 2016) they are working on a new album.

This track is called All In

In the late 80s, I was a regular binge drinker and often went to pubs and clubs to see bands play. I may have been under age, but I didn't look it, so I was never hassled for ID. One night my friends and I went to the Petersham Hotel (Sydney) to a live music venue called Max's. They showcased a lot of local metal bands, and we were metal fans.

I recall not being greatly impressed by the amateurish bands that night, but decidedly more interested in a young lady who was there. I spent most of the night imagining starting a conversation with her, which never eventuated.

On our way back to the train station, someone called out to us from behind. We stopped, as you do. The speaker was a punk who spoke in an accent so thick we had no idea what he was saying. From his increasing tone and agitation we suspected something might be wrong, and had that confirmed when he hit one of us, then pulled out a butterfly knife.

We ran. Thankfully, he didn't follow.
Posted by DA Cairns at 6:09 PM

Email ThisBlogThis!Share to TwitterShare to FacebookShare to Pinterest
Labels: a to z blogging challenge, A to Z of heavy metal, French metal, God Damn, headbanging around the world, southern metal