“Fourteen dead and six more critically wounded. He was still unable to interpret these events, to decipher the implications. Border protection had never been so deadly. It had never come at such a cost. What did it mean in terms of the perceived increase in people smuggling activity through Australia’s northern seas in relation to the heightened awareness of every citizen. Australians were xenophobes. He knew that. He’d experienced racism first hand, but he did not hold it against them. Even the word ‘them’ made him cringe. He was one of them. Why could he not think, automatically of us, rather than them? We, he thought to himself, deliberately correcting, are no different to any other nation on Earth. Filled with people who are afraid of what is different and of what is unknown.

He finished his cigarette quickly, suddenly aware that he was wasting time.”
From chapter 3, Ashmore Grief

Racism is much more prevalent than most people care to admit. Many racists would not even consider themselves to be xenophobes even when uttering statements which are introduced with the phrase, ‘I’m not a racist but...’ Most people hold prejudice in their hearts and although they are not necessarily aware of it, it influences they way they think, behave and speak.

My wife was born in Thailand. She has lived in Australia for over 20 years and is a citizen. She earned a nursing degree here, and is now working in the Renal Unit of Wollongong Hospital. A qualified and competent professional, as well as a compassionate person and a diligent worker, she still experiences racism. People presume certain things about her because of her appearance and they equate her accented English as sign of inferior intellect. She has driven herself hard over many years of study and labour to prove herself good enough, and is only now learning that for some people, there is no such thing as ‘good enough.’ 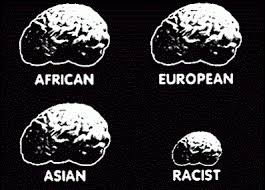 Xenophobes are ignorant and narrow minded people who discriminate against people and treat them disrespectfully, and in some cases, worse than that. Regardless of superficial physical differences, or cultural or religious differences, people are the same. We always have been and always will be. We have the same basic needs for food, shelter, love, security and purpose. When we fail to see and appreciate our commonalities, we are both blind and stupid.

Photo sources:
http://blog.ryding2health.com/2013/06/02/daily-post-silver-linings-racism/
http://www.astrologer.com/tests/racism.htm
Posted by DA Cairns at 4:33 AM