Wittaya was on his feet gesticulating wildly at the television. The object of his wrath was the referee who had just awarded a try to the Bulldogs over their arch rivals the Melbourne Storm. Although Wittaya was a Sydney boy, Melbourne represented how he felt about his place in the world. They were a team which had dominated the game for over a decade. A team which all other teams aspired to emulate. A team of outsiders representing a state which was so passionately in love with Australian Rules Football that they had little affection left for a team full of New Zealand and Queensland imports. The Melbourne Storm were hated because they were so good. It was jealousy. Plain and simple, and exactly the same puerile emotion felt by his enemies towards him: a young, ambitious senator on the rise through the ranks.

‘What is the point of having a video referee if they are not going to use it? That looked dodgy at normal speed and the ref was not in a good position to see it properly. What do you reckon, Kelly?‘”  from chapter 9, Ashmore Grief

This is a bit of stretch in terms of being connected to my novel, Ashmore Grief, which is my theme for the A-Z Blogging Challenge, and it’s a repost from last year’s challenge but rugby league is such a great game, I just wanted to share this again. 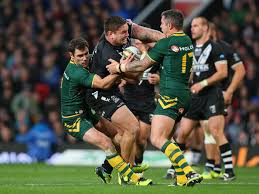 Last night I went to a rugby league match. Those of you unfamiliar with this fast and brutal sport should think in terms of American Football without all the padding and helmets, less players and few breaks in play. Rugby league is 80 minutes of skillful gladiatorial combat. So here I am in a hotel room, the morning after the game, in Canberra which is not only our national capital but is also celebrating its 100th birthday. As part of the celebrations, it hosted last night’s match at Canberra Stadium. Just over 25, 000 people, of which I was one, watched the first rugby league test match between Australia and New Zealand to be played in Canberra. It was an historic night. It was also an historic night for two of my guests. My niece and nephew are visiting from Thailand, and I felt obliged to share this wonderful facet of Australian culture with them. They were exposed to some of what is good and bad about living in Australia. 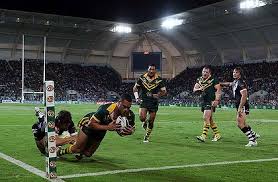 The free bus, which was to take us to the ground from where we parked our car and had an awesome Italian meal, was late. When we got to the ground, there was a massive queue of ticket holders like us, who were being slowly corralled through just four ticket gates. The teams came on to the field while we were outside. The national anthems were sung, the haka performed and the game commenced all before we made it in. We were then directed by stadium staff to the wrong end of the ground, and by the time we walked to the other end, found our seats, ejected the people who were sitting in our seats and finally sat to watch the game, twenty minutes had elapsed. It was very cold but we cheered with vigour as our boys finished strongly in what had been a tight contest. With a victory under our belts we left the ground in high spirits, and went to join the crowd of people waiting for buses. It was long wait. I thought my niece and nephew, unaccustomed to cold weather, might die from exposure. The crowd jeered the stadium staff as they apologized for the lack of buses as we stood and made the best of our plight.

Last night was one of those nights which will be talked about for as long as we live. A great victory by a great team with great support from patient and generally good humoured fans. I love my footy. What sports are you crazy about? What lengths have you gone to see a match?

Photo sources
zimbio.com
smh.com.au
Posted by DA Cairns at 4:04 AM