V is for Victory

V is for Victory

“Mark was at the Marrara Cricket Ground watching Australia play Bangladesh in the first test match when he received a phone call he was not expecting. The Top End sun beat down upon the heads of the players and most of the fans as Australia took control of the match early in the post lunch session on Day One. Stubborn resistance but the Bangladesh top order batsmen faltered after the break with the Australian bowlers claiming three quick wickets. The crowd was jubilant, cheering and swilling beer from plastic cups.

A lull in the vociferous celebrations allowed Mark to hear his phone, otherwise he might have missed the call. He answered without attempting to subdue his excitement.

‘Hello, Mark. Wittaya Keawwanna here. How are you? Do you have time to talk?’

‘Sorry, what was that? Did I catch you at a bad time?’

Mark yelled to his mate beside him that he needed to go and take this call to which his mate merely raised his plastic cup.

‘Sorry Senator. I’m at Mararra. At the cricket. I’m just trying to get away from the noise. Bear with me will you?’” 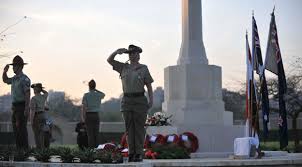 There are three games of rugby league on today, and three games of Australian Rules football. It is Friday but not a typical Friday. It is April 25: ANZAC Day in Australia and New Zealand. This morning many of us attended dawn services at various locations around the country to commemorate one of our most significant national days. This afternoon many of us will watch a game of footy or two or three. We will cheer for our teams and hopefully celebrate their victories. Our sporting heroes will entertain us and inspire us. However, today is not about sport. 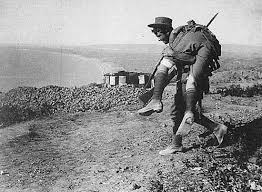 On April 25, 1915, around ten thousand Australian and New Zealand soldiers died at Galipoli in Turkey as they attempted a poorly plalnned beach landing at what is now called Anzac Cove. The sixteen million lives lost during the First World War should have deterred us from further international conflict, but it didn’t.  Victory came at a terrible cost, and as history has unfolded, we see nothing but misery and devastation as nations have fought each other. Men and women have served their countries fighting for what they believed in, and dying for it. Today we remember those who have died, not as a glorification of war but as an acknowledgement of the sacrifices made by honourable and brave people.

The spirit of the ANZACs is alive and well in Australia. As we drink and eat and watch the footy, we will remember our true heroes. To all Australian armed forces personnel past and present, I say “thank you.”
Posted by DA Cairns at 12:19 AM