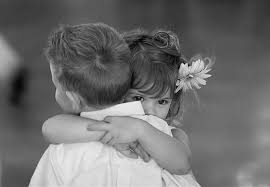 This may cause some discussion amongst readers. Is a hug a small thing? Some would say even a small hug is a big thing. Others might suggest that some hugs aren't as meaningful or poignant as others, and that can't be contested. Although one might think that all hugs are nice, some would disagree: unwanted hugs, for example, are certainly not nice. Anyway, I'm not here to debate the merits or significance of hugs. I'm here to tell you about a recent hug which meant a huge amount to me personally.

Last Sunday night we had a family farewell dinner for my son who was heading off to Europe for a six week holiday. After dinner we hugged, and I wished him well, thinking that would be the last time I saw him before he left. Four days later, the day before departure, I was at his house to pick up my daughter and my son was unexpectedly there: washing clothes and packing. We talked for a bit, and then we hugged again before I said goodbye. It was such a lovely bonus to be able to hug him once more.


I don't see much of my son these days. He's busy with work and uni, and his girlfriend, and that's all okay. He's 19. He has his own life now. I've been letting go of him slowly every since he started school, but I am thankful for the fact that we have a good, close relationship. Despite some dramatic turbulence over the last 12 months or so, due to the break down of my marriage, we are still friends and of course I am very grateful for that. That last hug was serendipity: a small thing and a huge thing simultaneously.

Have you had a nice hug lately?