I'm not going to tell you that I slept well on the ground, in my swag, outside, because I didn't, but at least I could see where I was going when I had to get out of the swag, put on my damp shoes and walk to a suitable tree on three occasions during the night. I've never seen a brighter moon. Stunning.


Matt played the morning song, and woke us up with a cheery greeting. He had told us that we had to tell him we loved him when we woke up so we dutifully did so before receiving our instructions. Departing in 45 minutes: time enough for breakfast, and to roll our swags. 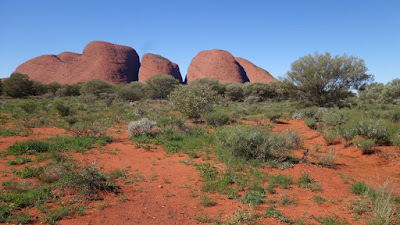 We were driven to another campsite where we had a shower, before heading off to Kata Tjuta. After arriving at our destination, we began our hike and upon reaching the beginning of the circuit track, Matt gave us a very entertaining geology lesson which involved a bit of a pantomine with some of the group pretending to be mountains, and some carrying rocks and dirt, and me and Elvis saying 'holey, holey, holey' as we twisted our butts towards the ground in an hilarious approximation of seismic activity. 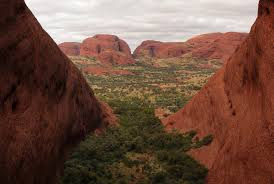 With instructions on where to meet, we set off; marveling at the strange rock formations of Kata Tjuta which translates as 'many heads.' There was an easy walk followed by a very steep stone staircase which led to the lookout where Matt was waiting with snacks. Thus refreshed and photographed we completed the walk 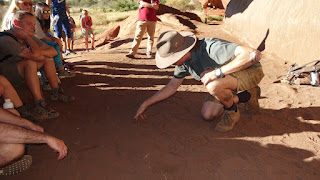 and traveled to the Cultural Centre at Uluru. After checking that out, we went on a short walk to see some of the cave paintings and listen to Matt tell us a story while drawing in the sand on the floor of one of the caves. 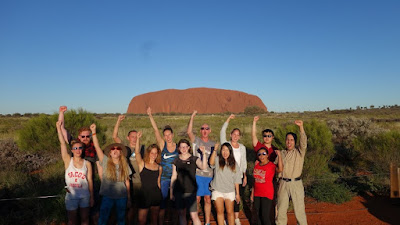 Our next stop was the Uluru sunset viewing area where we grabbed a table, and had a beer while Matt cooked dinner. It was here that our war cry became important. As people flooded the area, pouring out of tour buses, we had to defend out territory so we used the war cry to scare them away. It was so beautiful to see the moon rise beside Uluru and the sunset behind us. We were the second to last to leave the area. 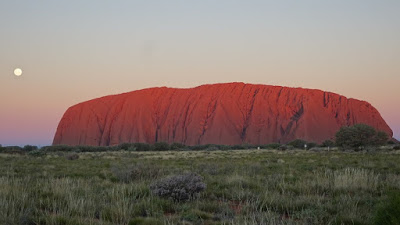 When we returned to camp we made quite an entrance, Queen's We Are The Champions was blaring from the bus accompanied by us singing, waving our arms and pumping our fists. The whole campsite knew that the Rock Tour, the best tour, was back in town.

After showering, we gathered around the campfire, drinking and chatting, until it was time to retire for the evening.
Posted by DA Cairns at 4:02 PM