The Sound of Truth

Spoiler alert. If you are planning to watch Mud, you may not want to read this post. 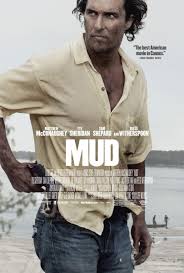 Mud is a engaging drama with excellent acting performances by Matthew McConaughey and the supporting cast. The title of the film is also the name of McConaughey's character and further refers to the murky ambivalence of the adults in the film. Mud is a coming of age story focused on 14 year old Ellis, who looks for love, truth and security in the midst of the breakdown of his parent's marriage. What I particularly liked was the uncertainty I felt about the characters' actions and motives. I really cared about all of them, especially Ellis, who made a curious decision to trust a complete stranger which led to a potentially disastrous chain of events. His friendship with Mud didn't make sense and I worried the whole time that Mud was going to hurt him. Mud spun a tale of love, a fairy tale romance about a girl he had loved all his life and for whom he would do anything. With his parent's love for each other evidently dying, Ellis latched on to the fairy tale and decided fight for it, alongside Mud. Ellis also fell in love with an older girl who flirted with him and invited him on a date.

The problem for Ellis was that he wanted so badly to believe in love that he was blinded to reality. Mud was a violent criminal, obsessed with the love of his life, Juniper, who kept running off with other men. Mud had allowed a fantasy, a distortion to dictate the terms of his life. He was a fugitive. Juniper loved him but did not want to be with him. She simply liked having him as her fall back guy, and the man who could take care of her problems. Mud and Juniper presented two different sides of the story to Ellis. Tom, Mud's surrogate father, told Ellis some harsh facts about Mud as well, yet Ellis wanted the fairy tale ending so he got deeply involved. The older girl led him on, then dumped and humiliated him. His parents separated and lost their family home as a result. Ellis desperately wanted everything to work out, but it didn't, and his foolish pursuit nearly cost him his life.

Where do we draw the line? How far would you go to get what you want? What would you be prepared to do to fulfill your dream? Sometimes, we don't like the truth and we don't want to accept it, so we don't. Sometimes this results in success. Sometimes it results in catastrophic heartbreak.

As I lay Dying have a song called The Sound of Truth which contains profound insights into the human heart. I leave you with a couple of lines from the song.


But what wisdom is there within in us,
to live based on the feelings of our hearts.
How many times has instinct let us down,
never to be thought through,
never to be questioned.
We have all heard what we wanted to hear:
Truth that sounds right to our ears.