Under normal circumstances it would be hard to find something to say about your team's performance -either good or bad- when they did not play on the weekend. However, the demise of the 'once were mighty' Bulldogs is not an ordinary state of affairs. 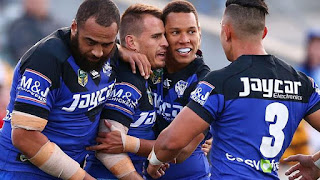 Yes, we received two competition points for nothing, courtesy of a bye. Each team gets two of these during the season which makes it impossible for any team to finish the season with zero points. The byes are organised around the State of Origin period (New South Wales V Queensland) and are designed to give representative players are little bit of breathing space, and to offset the negative effects felt by teams with a high number of rep players who are unavailable for their clubs the weekend before each Origin game.

The Bulldogs had three players in the NSW team, but did it make any difference to our performances? No. Rep players or not, injured players out or not...it's all the same. We try hard-most of the time-but seem unable to sustain the effort for the whole 80 minutes. In patches we look good, and our defense is not terrible. In fact we are ranked the third best defensive team as measured by number of points conceded. 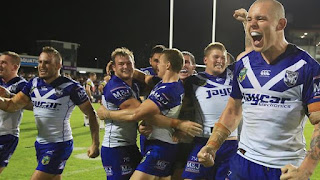 Having such solid defense should see a team placed higher on the ladder. The best defensive team, Melbourne Storm, are leading the competition and also boost the best attack. Makes sense right? Statistics may not tell the whole story but they don't lie.

Why can't we score points? Here are the three things hindering our attack.

I rest my case. I can hardly wait to attack my team again next week after we have done battle  with one of the top eight contenders: the Brisbane Broncos. I would wish us luck but we need more than luck.
Posted by DA Cairns at 1:25 AM