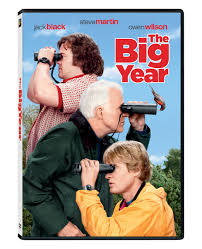 In the film, The Big Year, Owen Wilson plays a world champion, (of the United States), birdwatcher, or birder as these fanatics call themselves. His hobby has cost him three or four marriages and seriously threatens to derail another one in the film. Jack Black and Steve Martin also play birders who become friends on this mutual quest to break the record for most birds seen in one calendar year in North America.

The film explores the idea of sacrifice. How much do you lose when you pursue one goal with relentless passion? If you want to be the best, what does it cost? Are you prepared to do whatever it takes to achieve your goal? Think before you answer...how much are you prepared to do, how far are you prepared to go to get what you want? How do you define success? What are your priorities?
As in life, the characters in the film face very difficult choices about what to do with their time and money, and how to balance competing demands.

Those few who reach the pinnacle of their chosen field of endeavour know the answers to these questions. They've already done it, lived it. Given up things, missed out on things, lost time, lost childhoods, lost relationships, and sometimes even lost themselves in their persistent and single minded hunger for success.

I have never wanted anything that badly. I have never burned sacrificial offerings on the altar of my dreams. I am a writer and I would love to escape the confines of obscurity, but I won't do whatever it takes. I have already put my family first on numerous occasions.  I have put my physical and mental health first. I have had other priorities. Perhaps I will never make it as a writer, never be successful because I am not prepared to do whatever it takes. Then again, maybe that means I am already successful.

I highly recommend the movie by the way. Funny, clever, thought provoking and heart warming. Romantic, in an unconventional way. Beautiful locations and if you like birds, it's a no brainer. I was worried the presence of so many stars might be masking a dud script, and I considered the fact that it was released straight to DVD. However, I liked it a lot.