One of the innovations introduced to the game of Rugby League as part of News Corporation's attempt to take over the game in the mid 1990s was video referees.

In order to remove human error, or at least reduce the number of incorrect decisions regarding the scoring of tries, an additional referee was employed to sit in a box at the ground and watch video replays of the action. If the onfield referee could not decide whether it was a fair try according to the laws of the game, then he would refer it upstairs. The point was to reduce the number of incorrect calls and to provide excitement for the crowd as they waited, tension mounting, for the decision of the video referee. 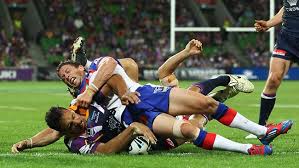 To score a fair try, a player must force the ball down, on or over the try line with at least one hand on the ball. That's the way it should be anyway. Now we have referees awarding tries to players who "force" the ball with their fingernails, their elbows, their chests, or worse, to those who appear to drop the ball. They use a term called "benefit of the doubt" which means they still aren't sure if it is a legitimate try despite looking at thousands of slow motion replays and holding the game up, but they award it anyway. They don't know, but they give the player the benefit of the doubt. This rubbish is ruining the game.

I do not understand why the video referees continue to award tries which Blind Freddy can see are not tries. Perhaps I could give the video referees themselves the benefit of the doubt and say that they are only interpreting the rules. If that is the case then the rules suck. And what about the on field referees? Professionals, fast and fit who position themselves perfectly on the field to see what happens, but are too afraid to make decisions? And the touch judges who don't raise their flags even though they are standing right next to a player who steps on the sideline? Do your damn jobs! Stop destroying the game with gutless officiating.

We now have more errors and worse errors than we ever did under the old system of the one referee and his two eyes. Right or wrong, we accepted the referee's decision, or we blew up about it, but it stood. Now we wait and watch endless replays which clearly show "no try" only to be told that our eyes have deceived us and the player did not drop the ball, and it is a try. This insanity must stop. The Commission must make this a priority when they review the game in 2012. I want the video referee abolished.

You can read more detail about the war here http://en.wikipedia.org/wiki/Super_League_war