I is for Insomnium

Finland is one of only three countries in headbanging around the world to provide two bands. Insomnium is a melodic death metal band formed in 1997 in the city of Joensuu. Singing about darkness, loss, sorrow, pain and nature, the band also features doom and progressive metal influences. For me they epitomise the very best elements of melodic death metal. 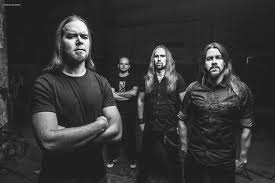 This is my favourite song at the moment. I can't get it out of my head. While we sleep is from their 2014 album Shadows of the Dying Sun.

In the mid 1980s, I was experimenting with more extreme genres of metal when I discovered a band called Possessed who have been credited as the founders of the death metal genre. At the time, I was also trying out other things like petty crime, binge drinking and drugs. I also had a strong negative reaction to many of my friends becoming 'born again' Christians. Possessed were the exact opposite of a Christian worship band. One of the songs proclaimed their faith with the lyrics: 'We love you Satan, we worship you.'

Hearing that record was part of a series of events in my life which I would describe as turning points. It was too much for me. I actually threw it away after just one partial play through, and have steered clear of bands with overt references to Satanism or occultism.

Email ThisBlogThis!Share to TwitterShare to FacebookShare to Pinterest
Labels: a to z blogging challenge, A to Z of heavy metal, Finnish metal, Insomnium, melodic death metal