With another 95 Indonesian footballs lost overboard and currently the objects of a search and rescue mission, I am wondering why after decades of illegal boat arrivals to Australian shores, we have not figured out how to play the game fairly. After endless debates, propaganda, political rhetoric, ill informed and bigoted public opinion, and through changes of government, and one report followed by another, the terrible problem of boat people is still a political football, and therefore the people themselves, the victims, the desperate refugees, have been and are treated like footballs.

The current Federal government, having been forced to ditch its controversial Malaysian solution, has finally decided to go back to the Pacific Solution (off shore processing) policy of the previous government. The theory says that if illegal footballs attempt to reach Australia by boat they will be intercepted and locked up on a Pacific Island, Nauru, or Papua New Guinea, where they will be stuck for months or even years while their claims for asylum are properly assessed. This is supposed to act as a deterrent. I'll bet that it doesn't work. These poor footballs will still have a better life even if they are imprisoned on a small island, and most of them will eventually make it to our great country, where they are welcome.

The millions of dollars being spent on the interception, rescue, transfer, detention and processing of footballs is a disgraceful waste of resources but we cannot kick them overboard, we cannot sink their boats, and we should not turn our backs on them. Do they present any danger to us? Ignore the Howard government's pathetic attempt to frighten us by telling us to be alert but not alarmed. Dismiss the racist cries of Australia's Chicken Littles who say we are being overrun. Think for yourself. Waves of migrants have been arriving on our shores since the birth of our nation and have helped construct the beautiful tapestry that we are. Do we really think that we may be the subject of terrorist attacks and must therefore lock up innocent women, children and men. Spend the money on helping them settle here, on helping them heal, on giving them a second chance.

I'm afraid, but not of the footballs. I'm afraid we are too small minded and not generous enough to properly care for our fellow human beings.
Posted by DA Cairns at 2:00 PM No comments: I read Puberty Blues, the novel on which the series is based, when I was in high school, and I saw the movie. The show is filmed in the Sutherland Shire where I spent all my teenage years. One of the main sets is my old school, Caringbah High. Close enough to thirty years have passed since I climbed those steps and walked those halls: a purposeless teenager living for the moment, for the weekend booze up and the girls. Watching Puberty Blues took me straight back to memories so vivid I can still smell them and taste them. As soon as I recognized what was happening, I should have switched channels. This was way too close to home.

Perhaps I wanted the show to say something profound so that I could excuse its vulgarity. Perhaps, a part of me still yearns for those hedonistic days when I was the only person who mattered. Perhaps, to my shame, I simply enjoyed the titillation.

Whatever the reason, I watched a sexually frustrated husband masturbating in his bathroom, a teenager bribing her primary school aged brother with cigarettes, an eager to please teenage girl fellating some guy on the beach, a teacher staggering around drunk at a party attended by his students, an intoxicated group of parents playing strip poker, a young man buying a bag of marijuana from an ice cream van, and smoking it on his bed, and the straw that broke this camel's back: a teenage girl passively lying on the beach, in full view of her group of friends, being sexually used by her boyfriend.

I felt sad and sickened, and I still do. Puberty Blues appears to be a glorification of what is base and animalistic about humans. Young people who don't know who they are, trying hard to be someone they think they want to be, and doing things they shouldn't be doing. Following each other as they stumble through the darkness of immorality.

I thank God everyday for rescuing me from that pathetic existence.

The once every four year sporting extravaganza known as the Olympic Games is over. The dust has settled on the track, the waters are calm,  and London's Olympic village is a ghost town. Athletes from across the globe have returned home, apart from the odd asylum seeker, and the many who live in the host nation of what was yet another in a pantheon of breathtaking spectacles. Now it is over, and the weird pariahs who hate sport rejoice while the many like me, who love it, lament its passing and eagerly await the next installment in Rio, here are my highlights and lowlights.

1. Pumped for Australian Golden girls, Sally Pearson (110m hurdle) and Anna Meares (sprint cycling). Truly great performances against high quality opponents, under a weight of great expectations.
2. In awe of the fastest man on Earth, Usain Bolt doesn't run, he flies. What an athlete!
3. Blown away by Oscar Pistorius competing as a runner at the Olympics without legs. Nicknamed Blade Runner, his story is surely one of the most inspirational triumphs of all time. Watching him run left me speechless. 1. Truly bummed by the anticlimactic performance of Australian pole vaulter, Steve Hooker. Gold medallist in Beijing, he qualified for the final in London with just one successful jump, then produced three bombs in the final including two attempts where he didn't even get off the ground.
2. Disgusted by Cameron van der Burgh admitting to cheating in the 100m breast stroke final. His justification, "everyone else is doing it." Not everyone mate. Australian Christian Sprenger, who won silver, didn't cheat.
3. Disappointed by Channel Nine's television coverage of the Games. Not only was it highly repetitive and generally poorly commentated but the same content was repeated on both their channels. I would rather have seen much less of the commentary hosts in fancy sets, and much more of the action.
Posted by DA Cairns at 3:54 PM No comments: 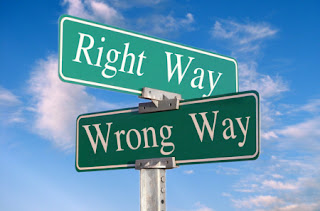 Is there such a thing as right and wrong? Is there an absolute standard against which we can measure every word, thought and deed? Does not our innate sense of justice demand that we have a perfect judge to determine the fate of those who transgress our moral codes? Where do morals come from?

There are two main schools of thought. Socialization theories of moral development suggest that morality is learned. In other words, we behave in certain ways, either good or bad, because of what we see others do. Especially our parents and later, more significantly our peers. In this view, our morality is shaped by the society in which we live. Extrinsic environmental factors are more influential.

Cognitive theories of moral development say that as we mature we construct our own understanding of the world. We figure out for ourselves what is right and wrong, good and bad, acceptable and unacceptable,and we do so by virtue of reason: by analyzing moral rules and making judgements about whether they should be followed or not. Intrinsic factors such as our own thoughts and reasoning are more significant in this view.

As is often the case with seemingly opposing theories, the truth  of how morality develops is a combination of both theories, and then a little bit more. The little bit more is the question left unanswered by both theories. Regardless of how our morals develop, we must ask where they came from in the first place. Have we just figured it all out for ourselves over the centuries, by trial and error? Who first decided that it was wrong to murder, to steal, to lie? From where did the sense of fair play within all of us come? If morality has no origin and is not absolute, then who can truly say what is right and what is wrong? Why do our souls cry out for justice?

I am comforted by the knowledge that there is a perfect judge, and one day he will call all of us to account. Absolute morality begins and ends with God. He is absolute truth, and denying it does not alter the fact.

Family stickers are quite popular nowadays. They adorn the rear windows of cars and proudly describe the  composition of the family who presumably rides around in that particular vehicle. The idea is that you find a stick figure sticker that represents a member of your family and stick it on your car window. Add another, different one, for each of your family members until you complete the portrait. It's harmless fun. Some sour doomboosters don't like them for some pathetic reason, but by and large they are inoffensive and they make people smile.

They aren't like some bumper stickers which are clearly designed to cause offense in their puerile and unambiguously ignorant attempts at humour. Seriously, I read some people's stickers and shake my head as I wonder why they would want to say such things about themselves and other people. Family stickers are nice and wholesome so you can imagine how shocked I was when I saw a sticker which attacked family stickers. Let me describe it. Four stick figure family members with hangman's nooses around their necks and the words F#@k Your Family.

The person who owns that car and put that sticker on the rear window appears not to like family stickers. Was it necessary to go the extreme of depicting them being hanged and to use an expletive? This person probably thinks it's funny. They probably hang out with  people who think it's a funny sticker. They'd probably tell me to f@#k off and mind my own business if I said anything. They'd probably tell me that I had no sense of humour.

The knowledge that there is one single person who finds it amusing to suggest hanging people because they don't like family stickers makes me despair for humanity. I know that, although this person lacks the sensitivity to keep their opinions private or at least publicly respectable, there are many who think the same way. It's a worry.
Posted by DA Cairns at 3:05 PM No comments: