Will you marry me?


A young couple made the news in Australia this week courtesy of a spectacular wedding proposal at Sydney's Vivid. A well dressed young man who was either not at all shy, or merely supercharged with the confidence which comes from being in love, asked his girlfriend to marry him by using a microphone to address her in the presence of family members and crowds of spectators gathered at the edge of Sydney Harbour to watch the light show.

That this, along with other high profile, flashy and over the top wedding proposals was accepted was never in doubt, and one has to admire the strength of feeling which drives men to go to such extraordinary lengths to propose. But is it romance, or showmanship? I wonder how even the wedding itself, assuming it goes ahead ( and I hope it does), could match the magic of the proposal. Does the elation and intensity of such a fairy tale moment as this proposal, guarantee the marriage will be filled with equally ultra romantic acts? The bar is set pretty high. Isn't this man simply setting himself up for failure? Don't we place ourselves in danger of crushing disappointment if we live in expectation of extraordinary moments?

Those who live with high hopes are always on the precipice of disillusionment, but that is not sufficient reason to give up. As long as we understand that extraordinary moments are not ordinary moments, and that they are much less frequent, then we can enjoy them. We can celebrate them and dive into the joy, and we can also cherish the allegedly 'ordinary' events which fill the spaces between the extraordinary ones.

The question of whether the proposal at Vivid was romantic or just showy is beside the point, as is speculation about the couple's future. It was a moment of happiness in which love made everyone feel good and forget their troubles and what is wrong with that?
Posted by DA Cairns at 1:45 PM No comments:

Three things that made me feel sad

Earlier this week I finished reading a book called The Stolen Children. The title refers to all the half caste Indigenous Australian children who were removed, in many cases forcibly, from their families as part of a racist and shameful government policy designed to 'whiten' Australia. You can read my full review of the book here on Goodreads https://www.goodreads.com/book/show/3186726-the-stolen-children 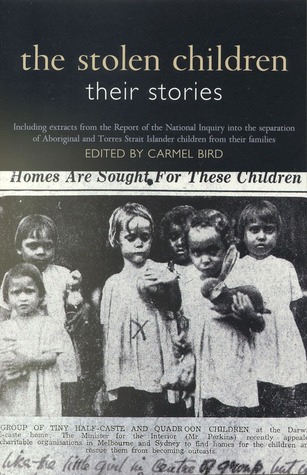 Some of the stories are very upsetting and depressing. My overall feeling was sadness.

In 1989, I joined YWAM (Youth With A Mission) which is an interdenominational Christian missionary organisation. During 12 fantastic months with them, I learned an incredible amount about God and about myself, I had some amazing, once in a lifetime experiences and I met some wonderful, beautiful people from all over the world. I recently learned that one of these inspirational followers of Jesus Christ, no longer considers himself to be a Christian, and has turned his back on his saviour. His is not an isolated case. I have been a Christian for 28 years, and I always will be because I cannot see any purpose in my life, or life in general without Jesus. It saddens me greatly to think that some have turned away from the ultimate source of love, faith and hope.

A fellow Christian recently read my novel, Loathe Your Neighbor, and said that I was not a good person, and could not be a Christian because of what I wrote in my novel. I have met this man once and had a very brief conversation with him, and now he has judged me. I feel sad whenever I encounter such narrow minded, grace deficient thinking. I feel even sadder when I consider how many people are like this.

There is much more to each of these anecdotes. There is always more to the story which is why I try to love and accept people instead of judging them.
Posted by DA Cairns at 1:03 PM 6 comments:

Putting My Face Out There

Since the release of my first novel, Devolution, in paperback I have become a publicity hound. I am trying to sell my books in an extremely competitive market, and as much as I find it annoying to have to spend so much time on marketing, it is a necessary evil.

Twice I have appeared out the front of my local book store doing meet and greet, sell and sign.  I've also appeared at the library to talk about writing. I've been to local markets three times. I've been in the newspaper three or four times. I've been interviewed on local radio. I've had some exposure, but as yet I haven't broken through. 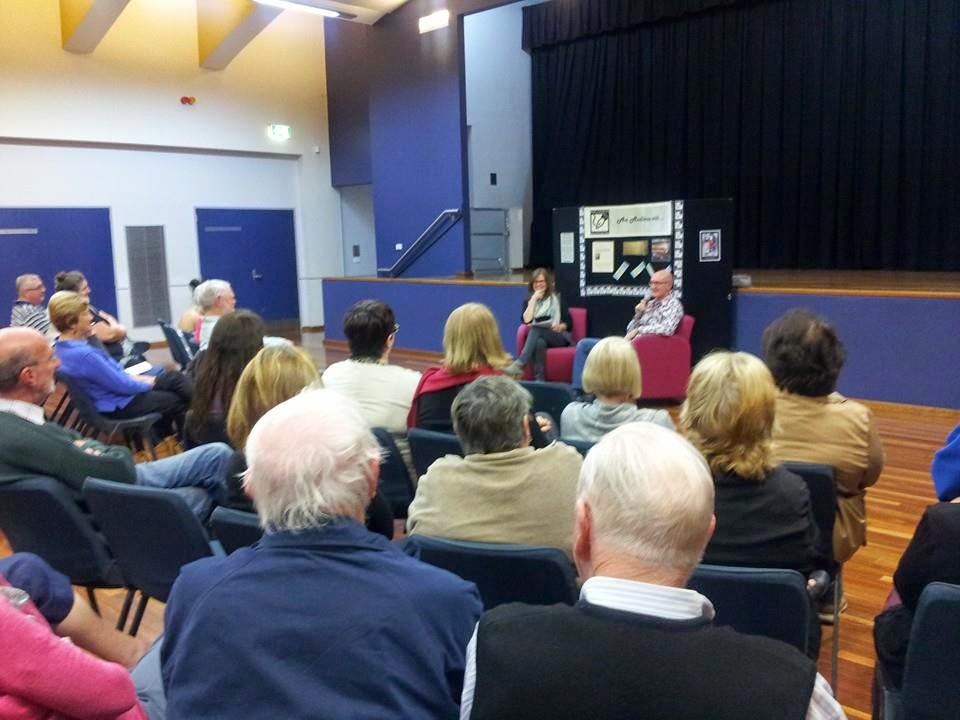 Last Wednesday, Dapto library hosted me as the guest author for their new program 'An Audience with..." It was a Q & A session with a group of people, most of whom had read my latest novel, Ashmore Grief, in their book clubs. They formulated some excellent questions which I was given in advance. I sat and was interviewed by the event organizer, Jo David, answering those questions and others that arose during the discussion. It was great. I loved being the centre of attention. There were nearly fifty people there, and I only knew 9 of them. I felt significant. I felt appreciated, and I felt tremendously encouraged.

Why? I've been reflecting on the occasion and how good it made me feel. To interact with people who had read my work, and to hear how they responded to it was thrilling. My desire as a writer is to touch my readers, to connect with them. On Wednesday night I was shown proof that I had succeeded. One woman said, 'I think everyone in Australia should read this book.'

I said 'amen to that', and I thought to myself how great would it be to sell 23 million copies. None of my novels have reached sales even in the hundreds yet, but now I believe that it is possible. If one complete stranger tells me they loved Ashmore Grief then there must be others. A writer's life is full of loneliness, discouragement and insecurity but last Wednesday night I received a massive injection of faith and hope.
Posted by DA Cairns at 3:02 PM No comments: 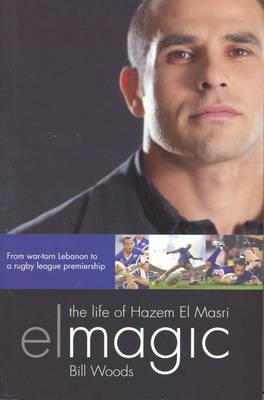 I have just finished reading a biography of former NRL superstar, Hazem El Masri. It is called El Magic and was written by Bill Woods. The issue of our sports stars being role models for our children and for the wider community is a vexed one. I believe we expect too much from ordinary people who happen to have outstanding skills in a particular sport and are therefore famous. It is a long way to fall from lofty pedestals and many do plunge, dragged down by the heavy weight of responsibility. Unable to cope with the demands placed upon them, they crumble and leave us disappointed and disillusioned. Hazem El Masri is a shining light: as an ambassador for the National Rugby League and as a hero of the Muslim faith. His story is well worth reading.

Which professional sportsperson is, or has been a wonderful role model?
Posted by DA Cairns at 2:59 PM No comments:

Has the jury reached a verdict?

2014 was my second year participating in the challenge. I expected more this time. More from myself, and more from potential readers/commentors/followers, or should I say, more specifically I wanted more of them, not more from them. I am not a blogger. I am an author who blogs to share my views on whatever grabs my attention or pulls at my heartstrings. However, my blog is mainly a promotional vehicle for my novels, and to a lesser extent my short stories. My efforts over a number of years have produced very modest results, and the 2014 A-Z Blogging Challenge has served to reinforce my view that I could be the most 'not an overnight success' author in the world. (I dip my lid to the master of hyperbole, the late Bryce Courtenay.)

Furthermore I have garnered additional evidence for my claim that most people want fluff and noodles. Despite being a realistic optimist, I think most of my posts on Square Pegs are too dark and heavy, and they make people uncomfortable rather than splash them with sunshine and rose water.

I wish to very sincerely thank the 25 visitors to Square Pegs during the challenge for the 72 comments they made, and for their own blogs which I mostly enjoyed, even when they weren't really my kind of thing. Here is a list of my top 5 visitors with a link to their blogs.

My favourite new blogger discovery was Gunmetal Geisha who I confess to falling in love with from the reading of her first post.

My most commented on post was the last one. Z is for Zanzibar, and my least, with an extremely disappointing zero comments was S is for Sex Workers. Can you imagine labeling a post with sex and sex references, and not getting any comments? Links for both are here for your pleasure.

I think the blogging challenge has some problems now because of its size, and for the record, I'm not sure it's cool to skip days, or to combine letters or to have single sentence posts. Having said all that, I will return in 2015,and I look forward to continuing more wonderful interaction in the amazing diversity of blogland.
Posted by DA Cairns at 5:31 AM 11 comments: