Writing and Other Near Death Experiences

I nearly died today. Again. I nearly died 6 years ago or so doing the same thing as I was today. Home renovations. Specifically installing a ceiling in a room. Holding a sheet of plasterboard above your head for any period of time, let alone five solid minutes, is enough to cause the only pain I have ever experienced which comes close to the intensity of having a needle stuck in my nostril to lance a cyst which had taken up residence there. But I digress.

The only thing I like about home renovations is that I get to spend time with my dad. He loves this stuff and he's pretty damn good at it. He'll take on anything. Any job big or small. I can't see the point. Maybe you save some money, and sure there is a certain amount of satisfaction to be had at the completion of a D.I.Y undertaking, but seriously, it is the epitome of agony, and frustration. Apart from nearly dying, I dropped one of my hammers down a wall cavity, left my mobile phone inside the new ceiling, and watched as water streamed in across the floor of the living room that we are renovating. The rain hammered down for most of the day and some of it found its way inside our house. I just shook my head and asked the obvious question, 'why the hell do I bother?'

Some would wonder how on earth I could write a book. Hour after lonely hour banging away on the keyboard. Week after week, month after month, labouring to get the words from inside your head onto the page. Then the rewrite, then more editing, followed by more editing. Publish? Sure, eventually. The anxiety and unfun exertions of marketing. The rejections. The anonymity. The prison of obscurity alleviated sporadically by little bursts of sunshine. I'm in the newspaper today: a feature article with a nice photo of me in the books section. People may buy my book, Loathe Your Neighbor, as a result of reading the article. They may not.

I should have been celebrating this marketing coup instead of torturing myself with plasterbard and power tools. To be a writer is to die continually, metaphorically speaking of course but I love writing. That's why I endure: the setbacks, the loneliness, the rejection. That's why I press on. I love it. Home renovations? I must be insane. I am insane.

Crime occurs daily. It's on the news. It's happening now. It's happening to other people. It's far away. Even in your city, it's still nowhere near you. It's distant, you are safe. You are a spectator. You are not involved. But you could be. 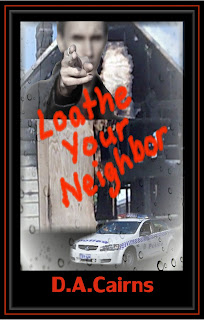 In Loathe Your Neighbor, David Lavender is aware of domestic problems next door. He has heard the loud, abusive arguments and other ominous sounds from within the walls. He has suspicions about the people who live there. He doesn't trust them. On a number of occasions, David goes to investigate, he knocks on the door, he calls the police. He gets involved partly out of neighbourly concern, and partly because he's a stickybeak.

Last week, just up the road from me, a man was killed in his home by his partner. News reports say that during the night she beat the man with an iron rod and poured boiling water over him. Apparently, when she woke in the morning, he was dead. She has been charged.

I wonder if the people who live next door to this tragic couple had any suspicions. If they did, did they act on them? Did they try to get involved, to help? More likely, they, like most of us, had no idea what was going on behind closed doors. They were probably ignorant of the violent disaster brewing. I hope they were. I hope they weren't afraid to get involved, or merely uncaring.

Most people  who are murdered are murdered by someone they know. Random killings of unconnected, unrelated victims are rare. I feel safe, but terribly sad that many people are living under potential death sentences by virtue of the people with whom they share their lives.
Posted by DA Cairns at 1:58 PM

Being a keen observer of people, a student of human behaviour, as many writers are, I enjoy going to parties. I like to watch people and interact with them. (I sound like an extraterrestrial spy!) The way we (it's okay, I am one of you) relate and respond to one another fascinates me.

I went to a birthday party last night. My very good friend, one of my best mates, turned 40. I looked forward to attending, not just to have a celebratory beer or two with the birthday boy, and to catch up with some other mutual friends but also to meet new people. I knew less than a quarter of the party goers. I like meeting new people because, although small talk can be hard and ultimately unrewarding work, there is always the chance that you will meet someone you really click with. I was also hoping the topic of conversation would turn to books and that I could hand out a few book promoting business cards which I just happened to have on me. (shameless self promoter!)

It was interesting to note that, despite some mingling which mostly occurred at the bar and on the bowling green, there were distinct groups. There were a couple of family tables, a table of church friends, a table of running club friends and one of old friends. Most people prefer to stay safe in familiar territory. Who knows if a woman at the running table would laugh at a joke made by a man at the church table? Most of us are insecure to some extent. Some just find it hard to make conversation or to get along with people. 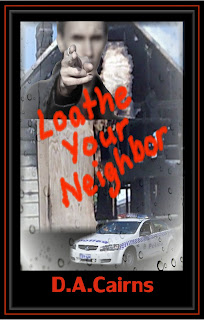 Regardless of what social phobias we may possess there is no excuse for rudeness. No justification for excluding people or making them feel uncomfortable. It  really isn't that hard to be nice and if you haven't tried it lately you'd be shocked at how much impact a smile can have. In Loathe Your Neighbor, David Lavender is basically a good bloke: easy going, friendly, charming and chatty. He's an ex sales rep so he knows how to talk to people and he likes people. Granted, he is inclined to extreme behaviour on occasion: the public snub by his neighbor contributes to feelings of hatred. The polite conversation of his communications trainer leads to fantasy and flirtation. Sometimes he gets things wrong. Sometimes we all get things wrong. Next time you go to a party, try to get it right. Smile. Be a good listener, and be yourself. And writers...watch closely and have your notebooks ready.

These nine letters are a program content advisory. The more letters appear after a show's name, the more there is in that program which may offend people. Language, violence, sex, drugs use, horror and nudity. I never watched it, but apparently Big Brother Up-Late had it all many years ago in its heyday.

A preacher I once heard, suggested that Christians should participate in popular culture in order to relate to people. When everyone's talking about Big Brother, for example, what can we contribute to the conversation if we haven't watched it? How can we reach people if we can't relate to them? Good point!

But for some reason I could not bring myself to watch it. Maybe it was the rebel in me that refused to look at the show just because it was popular, or maybe it just didn't appeal, or maybe I was worried that I might actually like it and get hooked. How shocking to enjoy a show featuring violence, language, sex, nudity, horror and drugs when I call myself a Christian.

The thing is, I have written a book which needs a content advisory warning, Loathe Your Neighbor. I'm a Christian who wrote a book which contains ungodly behaviour. I guess I'm in good company because I know another book which features all the same things as Big Brother-Up Late. Despite it's adult content, I happily confess it's my favourite. I keep reading it over and over again.
It's funny how what we read, watch and enjoy sometimes conflicts with what we believe, how we live and who we are.
Posted by DA Cairns at 6:42 PM