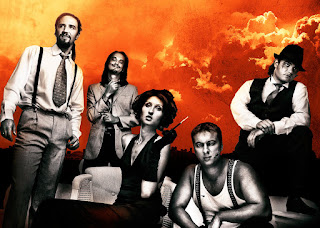 Their latest release is titled Wonderful Wonderful World and this track is called I Know Your Lie.

On September 3, 2008, I took my son, James, to his first metal gig. Him, one month shy of his 14th birthday, and me, an old headbanger, traveled to the Hordern Pavilion in Sydney to see Disturbed. Actually I was only vaguely aware of, or interested in Disturbed at the time. I was there to see my favourite band, POD, who were one of the support acts. The other was Alter Bridge.

James was a little overawed, by the atmosphere and the music, but he loved it, and it is one of my fondest memories of time spent with him. Sadly, James would no longer call himself a metal head, even though he still likes Metallica and enjoys a bit of metalcore here and there.

POD were great, and one of my greatest desires is to see them play a full show. One day...maybe they'll come back Down Under. As for Disturbed, they are now one of my faves.
Posted by DA Cairns at 2:33 PM