It wasn't the burger from Hungry Jacks, which is a relief because I might have never been able to eat where the burgers are better ever again. It wasn't wind pain, severe wind pain; the kind which has caused me to pass out twice before in my life. It wasn't like anything I had previously experienced...and it frightened me enough to call triple zero.

When the paramedics arrived, they examined me, questioned me and decided to take me to hospital. The shot of morphine in the rear of the ambulance where I lay down in agony, provided some relief. I said I felt sick so they gave me a shot of something for that as well.To cut a long story short, the doctors diagnosed renal colic caused by a 6.3mm kidney stone, and gave me some medicine to hopefully dissolve the stone and allow me to pass it naturally. 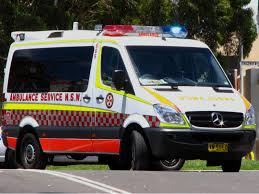 Despite having arrived home from the hospital in a taxi at 5:45 am, I went to work pacified, albeit by painkillers. Fast forward to the evening, almost exactly twenty four hours after I called for the paramedics, I was again in the back of an ambulance. This time, with two females who had me sit in the rear facing seat without offering me anything for pain relief. When I said I felt sick -who knew that severe pain and travelling backwards in a small vehicle could induce nausea? - they handed me a vomit bag into which I promptly despatched the contents of my stomach.

I don't know why the two male paramedics were so much more sympathetic and accommodating than the two female ones. I don't know why ambulances have backwards facing seats when travelling in that direction causes many people to feel unwell.

Please share your thoughts on these mysteries, and also your ambulance action stories, if you have ever had such misfortune.
Posted by DA Cairns at 2:10 AM