S is for Sex Workers

S is for Sex Workers

Amy, like most of her imported associates in the sex industry, spoke just enough English to do her job: to satisfy her clients. For small talk, or God forbid a decent conversation, Wittaya would have to go to another bordello where Australian girls worked. The problem with Australian girls was that most of them did not smell as nice. Not their hair not their skin. Neither were they as soft and smooth, nor as genteel. For proper social discourse before, during or after sexual intercourse, he would have to put up with hair which smelled like cigarette smoke and leg stubble. They all shaved their pubic hair these days as well and pierced themselves. Navels were one thing, but the labia and clitoris? He shuddered. None of these women who sold their bodies to him for an hour were even remotely close to the perfection he knew he would never find. But he had needs, and this was uncomplicated: an anatomical transaction between consenting adults.”

I have become increasingly ambivalent about the sex industry over the years. There are elements of it which I find abominable and disgusting. Most of what passes for fun, I find at best distasteful and at worst sickening: toys, fetishes and orgies strike me as inventions of the Devil, wicked distortions of the beauty of sex. I cannot stand sexual violence to the point that I skip sections of books which describe such practices, or fast forward movie scenes, or at least avert my eyes. There is a lot of evil in the sex industry. Aside from unmentionable sex crimes, perhaps the worst sin is the exploitation of the weak and powerless, including human trafficking. I really hate all these things. 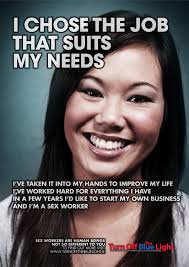 However, I cannot rouse any such antipathy for a business transaction between consenting and respectful adults whereby a client pays for sex. If a woman chooses to sell her body for financial benefit, then isn’t that her own business? Why should the provision of sexual services be stigmatized? What is the big deal if a relaxing massage includes what is colloquially known as a hand job? Is it a crime or a mortal sin for a man to pay for sex with a stranger if his wife will not make love with him?

I accept the moral, and some would say conservative ideal that is one man and one woman within the context of marriage, but...life is not that simple. Is the oldest profession in the world, a legitimate occupation? I think so. I’d love to hear your thoughts.

Photo source
http://nothing-about-us-without-us.com/be-wise-decriminalise-letter-writing-campaign/
Posted by DA Cairns at 1:05 AM