Three hundred years ago, Jonathan Swift wrote a fantasy novel which his protagonist called a travel diary. He visited five fantastic lands during his travels, describing them in excruciating detail. He also recorded the ill fated journeys which took him to those places. The novel is a traveller's journal which the writer asserts is completely true despite the absurdity and impossibility of those places existing. When he told people back home in England what he had seen and experienced, some people believed him, but only because he presented physical evidence. Some who heard his tall tales might have simply humoured him during his recounts, privately dismissing him as a madman.

We basically only have two sources of knowledge. First, what we have personally experienced involving input from our five senses, six, if you want to go there, Secondly, we have what other people tell us. We might hear or read the knowledge of others. Now without diving into the deep ocean of epistomology, the bottom line is that we accumulate knowledge either from ourselves or from others, and the acceptance of what others tell us depends on authority. In other words, we incorporate other people's knowledge into our own if we trust them. Theories of knowledge are much more complicated than that, but I'm a simple man, and that's how I nutshellize the concept as I understand it.

People often tell us things which contradict our knowledge which means that someone is wrong and someone is right. The local bookshop either sells my book or they don't. Rain is either wet or it's not. This isn't such an issue because most people happily adjust their thinking when confronted with fact. Knowledge is one thing, but experience is a different beast altogether. The biggest challenge we face is when someone tells about something they experienced, something which from our experience we know can't happen. For example, my friend tells me he saw ghost. I've never seen a ghost and I don't believe in them, but I trust my friend. That's when it gets tricky. 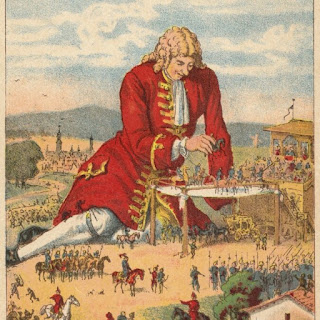 When Gulliver told people he lived among the thumb-sized people of Lilliput for two years, they would have thought he was insane, but what about his wife? She who was in effect Gulliver's mistress, because he was married to adventure, and spent most their marriage in foreign lands. What did she think when her husband regaled her with stories of a land inhabited by giants, and another ruled by a race of necromancers?

On Gulliver's final journey, the one which arguably had the greatest impact upon him psychologically - for of course he always managed to maintain his physical health in all these strange, mythical lands - he arrived in a land where horses where at the top of the societal hierarchy. They were the most intelligent, wise and benevolent race Gulliver had ever met. When Gulliver told them about how it was at home ,in England where horses were dumb, subservient beasts, his words were greeted with not only indignation, but disbelief.

I'm not sure if Gulliver's Travels is intended to be read as satire or not, but it sure came across that way to this reader. In any case, many people (tiny and enormous), and horses evidently believed what he was saying. Well, I said as I got to the end of Gulliver's Travels to discover that Gulliver was disgusted by people, even his own wife, when he returned to England, some people will believe anything.

Knowledge must be tested. If you believe everything you hear and read, and one day you write a memoir, you'll have to call it Gullible's Travels.