The Mirror: The Way of all Flesh

The title of Samuel Butler's classic semi autobiographical novel, The Way of all Flesh, is then a most appropriate title because the protagonist is a clergyman. Written by Butler between 1873 and 1884, the novel is an attack on Victorian era hypocrisy. 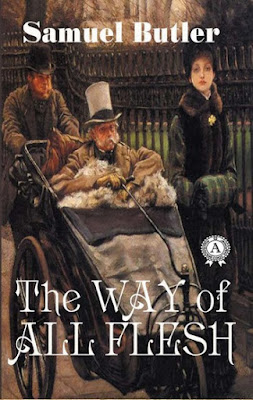 Classic novels may not be your thing, and I suspect it's probably because of the writing style. Being lexically dense, with old fashioned words and extremely long and complex sentences doesn't always facilitate easy reading, but I love this stuff. The themes explored by Butler in The Way of all Flesh: hypocrisy, religion, faith, atheism, nature versus nurture and family dynamics may well be oft explored ideas, but the classics have a precision and depth in their language use which is, although not rare in modern novels, certainly different. We should remember classical writers were not competing with nor were they influenced by film and television. In any case, the skill of the writer in dealing with universal themes to which everyone can relate, is to challenge the view of the reader; to make them think.

I've been posting quotes from The Way of all Flesh regularly on Facebook, since I began reading it. When I read something and I have stop, and re read it, and contemplate it, allowing it to filter through my worldview, I know I am reading quality and inspired writing. The quote I want to share in this post is one I found particularly pertinent as I am currently facilitating the journey of another group of men through the Valiant Man sexual discipleship program. This quote contains information about the main character which may be considered a 'spoiler'.

"Although in the healthy atmosphere of such a school as Roughborough you can have come across contaminating influences; you were probably, I may say certainly, impressed at school with the heinousness of any attempt to depart from the strictest chastity until such time as you had entered into a state of matrimony. At Cambridge you were shielded from impurity by every obstacle which virtuous and vigilant authorities could devise, and even had the obstacles been fewer, your parents probably took care that your means should not admit of your throwing money away upon abandoned characters. At night proctors patrolled the street and dogged your steps if you tried to go into any haunt where the presence of vice was suspected. By day the females who were admitted within the college walls were selected mainly on the score of age and ugliness. It is hard to see what more can be done for any young man than this.

For the last four or five months you have been a clergyman, and if a single impure thought had still remained within your mind, ordination should have removed it: nevertheless, not only does it appear that your mind is as impure as though none of the influences to which I have referred had been brought to bear upon it, but it seems as though their only result had been this-that you have not even the common sense to be able to distinguish between a respectable girl and a prostitute."

What I like about this quote is that it very accurately displays the ignorance and arrogance of men regarding sexuality. Good men get into trouble when they forget they are men. Most men are good at being providers for and defenders of their loved ones, but we are also good at ignoring danger and pandering to our weaknesses and addictions. It never ends well for the man who cannot control his sex drive.