It may be hard to fathom at the outset how a post about relationships would involve crabs other than the obvious allusion to sexually transmitted parasites, aka pubic lice. Let's therefore have a close inspection of the crab as one of God's creatures. 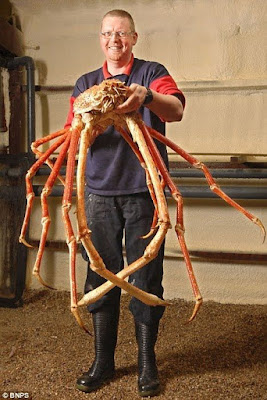 Crabs are decapod (10 limbs) crustaceans of the infraorder Brachyura. Found in all the world's oceans, in freshwater and on land, they are generally covered in a thick exoskeleton and range in size from the Pea Crab (just a few millimetres wide) to the Japanese Spider Crab which has a leg span of up to 4m-yes, I said four metres. There are 850 species of crab worldwide. They walk sideways because of the articulation of their legs, use very complex communication systems and are sexually dimorphic. I love sexual dimorphicism. Humans likewise display obvious physical differences between the two undisputed genders. Calm down. I'm not here to debate that issue. I'm talking about crabs.

Pubic lice are small, flat light brown parasites that cling to pubic hair and suck blood for nourishment. It goes without saying that if you have sex with someone who has these crabs, you will get them. It goes without saying that if you only have one partner who also only has you, and the two of you practice normal hygiene, pubic lice won't be a problem for you. Relax. I'm not here to sermonize about sexual immorality. I'm talking about crabs. 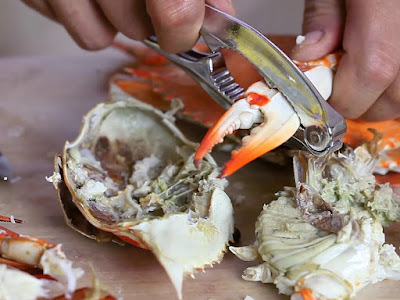 My wife loves seafood so the other day while shopping at Mr Barra she had to have one of the live mud crabs they were selling. I think crabs are more trouble than they are worth. They have so little meat on them, and it's so difficult and time consuming to extract it that I can't see the point. Furthermore, the price was alarming: $65 per kilo. I said nothing as my wife chose her crab, then finished her seafood purchases. I said nothing when said purchases totalled quite a sum of money. I just paid because she works hard, she likes crabs and I thought she deserved a treat. She was thrilled; both by my silence and on the appearance of my card to pay.

Crabs can be quite aggressive and are considered to be ill humoured and selfish creatures. Hence someone with a negative and selfish attitude is said to have a crab mentality. We also describe someone who is angry or even grumpy as being crabby.

What conclusions can be drawn from all this information? Certain crabs are good for relationships while others are not. Most sane people would eschew all contact with pubic lice. Many people of varying degrees of sanity like to eat the feisty crustaceans. We may not admire much about their behaviour, but here's the take home lesson: don't get crabs (pubic lice), don't be a crab, and be willing to overcome your negativity about eating crabs if it proves to be a blessing to your partner.

Finally and most importantly, good relationships do take a lot of hard work, but unlike eating, crabs the effort is absolutely worth it.