I’ve been a fan of Neighbours since it first came on our screens back in 1985. When I say fan, it isn’t my favourite show, not by a long shot and I haven’t seen every episode. I don’t have a dedicated blog. I’m not a member of any fan clubs and my knowledge of the show, the revolving plots, cast of characters and the actors who play them is not deep. However, these days I rarely miss an episode, most often watching catch ups on Tenplay. Usually, at any given time, I can tell you what’s going on. Occasionally, I lose interest with certain storylines and characters. At other times, I get right into it. There’s a current thread about a twenty-year marriage ending. Shane and Dipi. Shane lost the plot with a drug addiction. Dipi had an affair. The affair was explosively revealed by people with alterior motives. Shane moved on with Amy who made him happy and accepted him the way he was. Dipi declared her love for Shane and wants to get back together. Shane says no way. I can’t forgive you. Not a far-fetched storyline at all. I should know. I lived it. 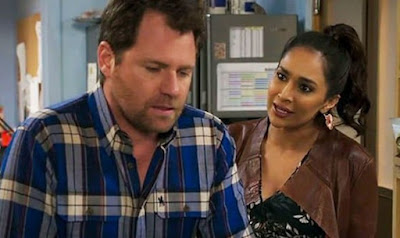 Neighbours is a classic soap opera. Everything that happens, though based on very plausible scenarios, is next level dramatic and intense. People are always saying they’ll never forgive someone for what they did. Then after a few more episodes, they do. All the main characters live in the same street, Ramsay Street, and work in the same suburb, Erinsborough. There’s always someone in Erinsborough Hospital. Two of the residents of Ramsey Street work there. There’s always a police drama. Two police officers live in Ramsay Street as well. You get the picture. The potential for drama is untold and for entertainment’s sake is often ridiculous. The various threads are sometimes light, sometimes heavy, but always fun…if you like soap operas.

An interesting subtext to the imaginary lives of Ramsay Street residents is the social engineering which drives both the creation of characters and storylines. Here’s a few examples. 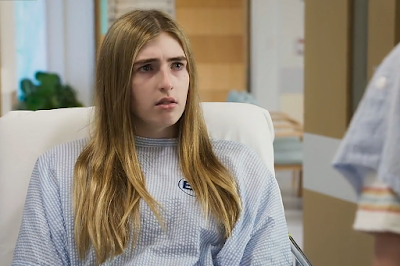 1. - Mackenzie is a transgender character who, not long after joining the regular cast, had her final gender reassignment surgery.

3. - The newest teacher recruit at Erinsborough High is deaf. The actor wears a Cochlear implant and plays a deaf teacher on the show.

Three of these four are controversial issues which the producers and writers of Neighbours, clearly very liberal thinkers (aka ‘tolerant and inclusive’ in newspeak), are not afraid to tackle. And why would they be? The deliberate move towards ‘normalizing’ people who have traditionally been marginalised by mainstream society and discriminated against because they are different is not necessarily a bad thing. However, it does mean, that because minority groups have to be given equal status and equal opportunity, we now have a situation in which the microcosm of a television show does not actually reflect the composition of society. What we see is what the makers of these shows want us to see. Ramsay Street has a transgender character, a same sex attracted male couple, and a same sex attracted female who injected herself with sperm so she and her friends could have a baby together. What they don’t have is anyone profoundly disabled, regular indigenous characters or anyone from an ethnic minority who migrated to Australia with poor English. Never mind those minority groups though. 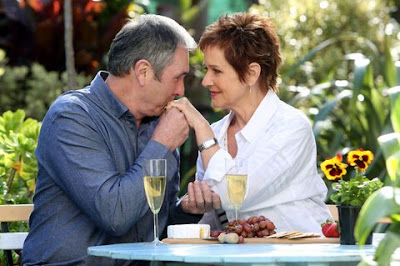 Getting back to the broader issue of families, Karl and Susan Kennedy are Ramsay Streets grandparents who have operated as defacto parents for many ‘strays’ over the years since their own children grew up and moved away. For example, Hendrix is currently living with them after his father’s marriage ended and he moved away. (His father is the guy who had the affair with Dipi.) The idea that families are no longer narrowly defined along the traditional lines of mother, father and biological children is simply an acknowledgment of reality. However, the concept of the extended, blended, all-inclusive family with many people contributing to the raising of children is not an innovation.

“It takes a village to raise a child” is an African proverb which reflects what we all know to be true, but it’s worth examining in much finer detail. If the village is a village of idiots then there’s no benefit to the child right? If the village practices female genital mutilation, for example, then perhaps that’s not a great village either. If no one works in the village, then that’s a pretty pathetic example to set for children as well. So, the value of the village quite clearly depends on a number of factors.

My point here is that television shows like Neighbours seem overly interested in dictating what modern families should look like. I’ve deliberately avoided talking about the show Modern Family, even though it is also a classic example of what I’m talking about. Popular culture is tremendously influential. To say the themes and storylines of many movies and television shows, like Neighbours, are merely mirrors of society is disingenuous. The truth is they represent a deliberate attack on the family unit.