Great movies sometimes appear from nowhere. You never hear anything about them before they are released, when they are released or after they are released...nothing; until you notice it among the many films to chose from on Netflix. You're looking for a family friendly film for Saturday night at the movies and there it is. 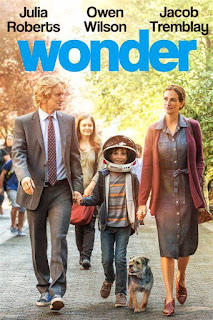 Starring Julia Roberts and Owen Wilson who are both perfectly cast, Wonder is the story of a boy who has a misshapen face courtesy of countless surgeries to help him survive the consequences of a rare genetic disease. Auggie is home schooled until it's time for him to start middle school, and his parents decided he should join the 'mainstream.' It's not an original story. Mask comes to mind instantly, but there are many stories of children and adults with deformities and/or disabilities who have to overcome fear and prejudice as they attempt to live normal lives. Wonder, in my opinion, stands out from the crowd.

"You can't blend in when you were born to stand out."
(Via's words of encouragement to her brother, Auggie.)

Beautifully written and acted, Wonder was a moving and inspirational film experience for all of us. We laughed. We cried. We raged at injustice. We rejoiced with acts of bravery and kindness. When so many films celebrate darker, nasty aspects of human nature and behaviour, Wonder shone the spotlight on what is great, what is excellent and praiseworthy. 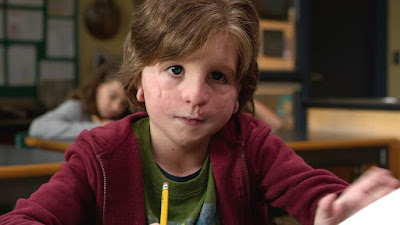 I particularly enjoyed the way characters loved with actions. In fact, for Auggie's friend Jack, and Auggie's sister's friend, they chose to demonstrate they they were sorry for what they had done, and that they loved and cared about their friends, by doing something. Beyond words they demonstrated love. It was very powerful.

They were too may great lines in the film to list them all, but here's a couple that stuck in my mind. Auggie's dad tells him that when he was wearing his mask all the time, he missed seeing his face. His says, "I missed that face. That's the face of my son. I love that face. I want to see that face." Auggie's mum tells him he's not ugly, he's beautiful. Auggie complains that she is only saying that because she is his mother. "So because I'm your mother, my opinion doesn't count? she says. "Right," says Auggie. She counters, "It's because I'm your mother, my opinion counts the most."

I highly recommend Wonder as a film which celebrates goodness, kindness and bravery. I dare you to watch it and not be moved, deeply moved.