Social media trends come and go in whirlwinds of popularity bandwagons. Somebody films themselves doing something, calls it a challenge, attaches the deed to a cause and posts it on one or more social media platforms, running it up the proverbial flagpole to see who salutes. The sought after salute in this case, is for the viewer to: 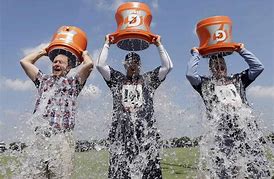 In July and August of 2014, the Ice Bucket Challenge went viral in support of Motor Neurone Disease. It is now officially an annual event, but subsequent incarnations have not matched the phenomenal $220 million (estimated) raised with the initial Ice Bucket Challenge which simply involved having a bucket of ice water dumped over the head of the participant.

The No Make-up Selfie Craze was attached to the cause of cancer awareness by Fiona Cunningham in 2014. More recently, a men's mental health challenge, of unknown origin, involving raw eggs, sugar, salt and beer has attracted some criticism because of the relationship between mental health issues and alcoholism.These are just a few examples.

There has been a flood of challenges in 2020, most of which are not attached to causes, but are simply one solution to filling the amusement vacuum created by the COVID-19 lockdown. You can read about this trend here.

The push up challenge is one I am participating in courtesy of being nominated by my friend and Over the Fence co host, Trevor. I even filmed one of my sets in the studio. I've noticed a couple of my other Facebook friends are also doing the challenge which involves doing 25 push ups everyday for 25 days. I've been mixing up the locations a little for interest and also lately adding some push up variations. Suicide prevention and mental health issues such as anxiety, depression and PTSD are the targets of this campaign and the reason why Trev and I are involved is because it's right in the pocket in terms of one of the major themes on our radio show 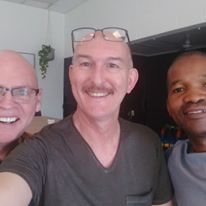 which is health. Over the Fence is a radio program for men on Darwin's 97.7FM: our tag is "talking about stuff that matters to men". We strongly encourage men to talk about their problems, so we see the push up challenge as a natural extension of this. We are also Movember activists.

As I write this, I have completed 18 days of the challenge, albeit it with a forced break in the middle due to illness. Although for me, it hasn't gained the traction I hoped, I have enjoyed doing my bit whilst keeping fit. If you get nominated, can I encourage you to go for it, or even just kick it off yourself.
Posted by DA Cairns at 5:39 PM