"As Mark settled himself at a table inside Peewee’s at the Point, he gazed out through the window across Fannie Bay to Darwin city. He sighed with contentment as he soaked up the exclusive ambience of one of Australia’s top restaurants. His contentment was devoured by the anxiety he felt about the salience of the occasion, and his bewilderment. What was he doing here? Less than a week ago, he had been dining with Lisa at The Jade Palace. This was a significant leap up the social ladder, and the company, although not as attractive as Lisa was bound to be intoxicating. He ordered a James Squire Sundown Lager, and a Puglises sourdough with wattleseed butter and bush tomato relish for an appetizer." 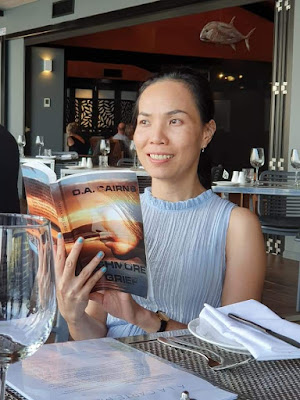 These words were penned some time in 2012 and later published in chapter 22 of my third novel, Ashmore Grief. The year of publication was 2013. I had never been to Darwin, nor did I imagine for a second that I ever would. Mostly set in Darwin, the novel was researched on the world wide web. The restaurant featured above, Pee Wee's at the Point, is one of Australia's top restaurants. I chose it as the setting for the important meeting in the narrative because of its prestige. I sent a copy of Ashmore Grief to the restaurant manager, as well as to television and radio personalities who I reasoned might be interested in this topical novel, and perhaps give it some much needed publicity. Despite the issue of asylum seekers entering Australia being a hot topic in 2013, and some favourable press, Ashmore Grief seemed destined for obscurity.

In 2016, I moved to Darwin to take up a new job and a commence a new chapter of my life. I never made it to Pee Wee's though, because it never seemed like the right time, and I didn't have the budget for it. (It actually isn't as expensive as imagined). It remained a dream of mine for many years: something I would do when the time was right and I had the right people with whom to celebrate.

Last Thursday night, I finally dined at Pee Wee's at the Point, with my wife, two younger children and my mum who paid for the meal. Mum is her on her fourth visit to Darwin, and said on this occasion that she would like to take us out for a special dinner. I suggested Pee Wee's and the rest is now history.

The restaurant's service was exceptional and the food outstanding. I felt extremely relaxed and happy; it was quite dreamlike.

My plan was to take a copy of the book to the restaurant and take a few photos. Mum suggested I ask to see the manager, to tell them about my visit and the connection between Ashmore Grief and Pee Wee's at the Point. I went one further by reading the excerpt above to the manager who was quite happy with that. She requested a signed copy which I dropped off to her a couple of days later. At that time she requested a photo with me and the book. 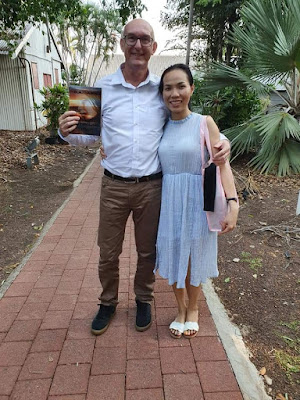 The total experience was mystical and wonderful, and whether it leads to anything or not, I will always treasure it. The new dream about me and Pee Wee's involves an elaborate launch of my 8th novel, Satan's Choppers (set again in the Top End.). I haven't even started writing the first draft yet, so that one is a way off. However, my first Pee Wee's dream took 7 years, and I'm a patient man, so stay tuned.