Most people are familiar with the concept of seasons in life, but these are really more aptly called stages. And stages have within them seasons. Periods of time. Happy days where everything seems to be smooth sailing and strawberry fields. Some stretches of months or years where nothing goes right. Spring seasons full of energy, new endeavour and lots of action. Others where nothing happens at all. Our emotions rising and falling as we experience the highs and lows of human existence.

For eighteen months I was a house sitter. During that season I never stayed in any one place for more than four weeks, and usually nowhere near that long. I chose this form of homelessness as a remedy to financial woes. It was mostly a terrific experience about which I have no regrets bar one little one.*

As the grant of a partner visa for my wife and children loomed on the horizon, I decided to act in faith, believing that God would not let us down. Having always been faithful to us, I had no reason to doubt his provision. I bought one way tickets for them to get here in time to celebrate Christmas and New Year. I enrolled my daughter in school and I took out a lease on a three bedroom apartment for us to live in. We started talking to one another and making decisions as though the visa had already been granted. Seven days before they were due to arrive they had no visa; neither a partner visa nor a tourist visa, which we had applied for as a bit of insurance. 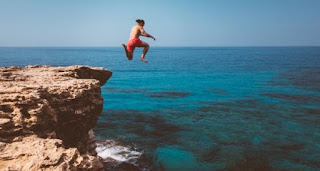 The transition out of the season of house sitting and waiting into  the 'oh man, I'm paying rent again now and I have a family to feed' season was not gradual. On December 16, my wife and two children arrived in Darwin and we jumped into the deep end together. My two eldest children are young adults now. It's been a long time since I lived with them and cared for them as children. I kind of forgot how noisy, messy and inconvenient children are, but I'm not complaining. I'm not complaining, I'm adjusting. We're all adjusting to this new season of living together as a family.

We've been waiting for some time for this new beginning. My wife had this dream of what the future would look like long before she met me. When we learned that we shared this dream and believed God had brought us together to make it happen, we were grateful and excited. We still are.

* My final house sit, which I had arranged long before we began our faith steps, ended up not working out for us. Had it just been me, it might have been okay but with the four of us having been catapulted into family life, the house where we stayed presented one too many challenges so we pulled out half way through. Of course, we notified the home owner and arranged a satisfactory replacement. It is the only time I ever let a home owner down, but I felt I had no choice other than to do what was best for us as a family.