L plates are squares of magnetic vinyl or plastic which are put on cars and other motor vehicles to indicate the driver of that vehicle is learning to drive. It is a legal requirement for the L plates to be displayed on both the front and rear of the vehicle. Except for motorbikes, the learner driver must also be accompanied by, and supervised by a fully licensed driver.

Exhaustive research* into the effectiveness of L plates for learner drivers has shown two things to be inarguably true.


In one sense, everyone is a work in progress. Nobody's perfect is a cliched often used by those who make mistakes or those who overlook the mistakes of others. However, cliches become cliches because they contain truth and hence are often repeated. Everyone makes mistakes.

Mistakes may have one of two primary causes: carelessness or recklessness. Carelessness implies a lack of forethought to the potential consequences of one's word or actions. Recklessness suggests the consequences may have been considered but not seriously. Reckless people often believe they are immune from normal outcomes. There will be some degree of selfishness involved in decision making. A reckless person may predict possible negative consequences, but will decide the potential benefit to themselves outweighs the danger.

The next level in this progression is the heartless person who deliberately chooses to hurt people. Calling such harmful actions 'mistakes' would be a ridiculous understatement.

How do we live? How do we fit in? How do we get on in the world? How do we achieve contentment and live peaceable and productive lives? L plates please, while we figure it out. L plates for those who are still learning life lessons. Do I mean all of us? Or am I perhaps referring to special cases? Particular circumstances which may have happened to me recently?

My wife is learning to drive a car in Australia. She's an experienced and quite skillful motorcyclist who's used to driving on the right hand side of the road. Controlling speed and acceleration with her foot is something she is still familiarising herself with. We may have ventured into traffic a little prematurely. My wife may not have been ready for what she encountered in her first few driving 'lessons.' This may have been a mistake on the part of her instructor, and I may be that very person responsible for pushing her a little hard. 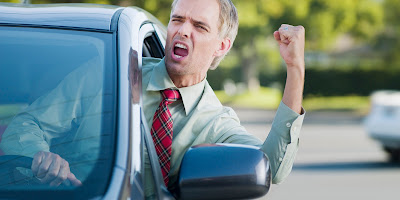 Nevertheless, there we were waiting to make a right hand turn from our street onto the main road. To cut a long story short we ended up stopped in the middle of the road, blocking cars coming from both directions. Immediately to the right of my wife was an angry driver. No harm had been done. We had simply delayed him, but he was going off his brain. If was difficult for my wife to shake off this experience and keep driving, but she did, because she's awesome.

The driver of the other car thought of nothing except the impact of the incident on himself. His anger and verbal abuse achieved nothing. No doubt he recounted the story to the next person he spoke with, and has probably retold the story many times since, with all manner of embellishment. He might often explode like that when people upset him, or we may have caught him on a bad day. However, the point is that uncontrolled expressions of rage are not uncommon. Moreover, such lack of self control is symptomatic of someone who is still learning how to manage their emotions.

Emotional intelligence is taught to children in schools nowadays, and so it should be, but teaching something -whatever it is- does not guarantee people are learning. We could wear L plates to indicate we are learning how to navigate some aspect of life or life in general, but that very action requires the kind of humility which is obviously absent in may people I encounter.

Despite all this philosophizing, it's possible the non L plate wearing driver who blew up at my L plate wearing wife is simply a tool: a rude, thoughtless and selfish man. Never mind. No one's perfect,

*I am not aware if any such research