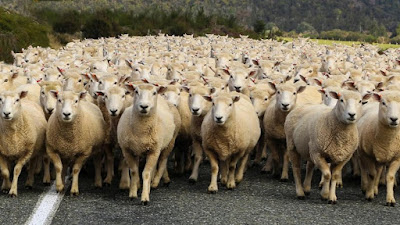 Sheep are very social animals which like hanging out together and among which there is very little dominance or aggression. They run from danger (sensible) and stick together in a large tight group for protection (also good strategy). These behaviours form part of what is known as "flock mentality" or "herd mentality".

Unfortunately flock mentality is such a strong instinct that it can override good sense. When one sheep moves the rest will follow, even if it does not seem like a good idea. There is no consideration given about whether to follow or not. Sheep follow. For example, in 2006, in Eastern Turkey a sheep tried to cross a 15 metre ravine. It died in the attempt as did the 400 other members of the flock who followed it. There may not be any actual danger, but if one sheep perceives it is in trouble, it will run and the others will follow.

I now can't buy toilet paper and some other things at the supermarket. There are limits on how much of any one thing I can buy. Only government pension/concession card holders can shop between 7am and 8am in the morning. I can no longer visit the supermarket after 8pm because they close to restock for the next day of insanity. This situation used to be amusing, but now I'm starting to feel angry about it. I'm disappointed by the herd mentality shown by my fellow human beings. Aren't we smarter than sheep? 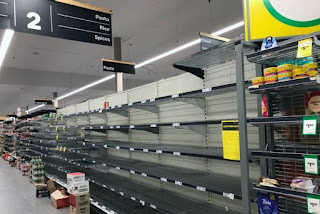 It only takes one person to spark a panic. Panic and fear are much more contagious than any virus, and equally as dangerous. I overheard a conversation between colleagues yesterday discussing how long they could survive on what food they had in their homes. People are seeing empty shelves at their local supermarket and reacting in fear; buying more than they would usually buy in case they "run out". In my home, we are about to run out of toilet paper because people are hoarding the stuff. Why? Why was toilet paper the first thing to disappear from our supermarket shelves? Why were people  fighting over toilet paper? COVID-19 is a respiratory virus with cold and flu like symptoms. Why not buy truckloads of tissues?

In my last post, which was three weeks ago, I said stories about COVID-19 dominate global news services now. Currently the situation is worse as the wave effect of the COVID-19 pandemic spreads. The economy is being smashed. Societal behaviour is being forcibly modified. Some industries are going down the toilet (and they can't buy toilet paper either). For example, Australia closed its borders to visitors from 9pm last night so there goes the tourism sector. I also said the virus will be contained. New infections will stop occurring. The death rate will slow to zero.Travel restrictions will be lifted. That hasn't happened yet. More people are becoming infected and more people are dying. However, I also said life will go on. This is not the apocalypse. It's not the end of the world. Even the actual end of the world is not really the end of the world.

The truth about COVID-19 has been discovered, and we have never been better informed about what it is and how to deal with it. Sadly though, the initial hysteria has not abated:quite the contrary in fact, and the media continues to feed this. Tabloid broadcasters encourage fear with sensationalist reporting, but there's nothing new in that, while the flock mentality sees many people behaving poorly; selfishly and irrationally.

Until today, I have resisted writing about COVID-19 again because I didn't think there was anything worth saying. It's all been said. It's all anyone ever talks about. I don't want to talk about it, but how can you not talk about something like this? COVID-19 has exposed our weaknesses. I live in the Northern Territory where, despite the fact there are no cases of COVID-19, the same hysteria has infected us. 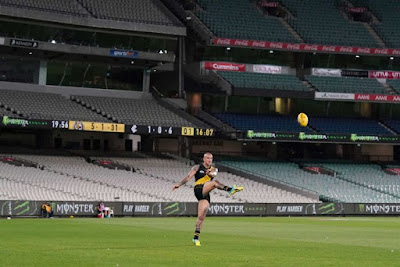 There are a lot of strange things happening. People aren't shaking hands. Football is being played in empty stadiums. Supermarket shelves are empty, devoid of certain products. We're all washing our hands a lot. Tomorrow my family will be watching a live streamed church service because we can't go to the actual building and meet together like we do every week. Some of what is going on is sensible and justified. Some of it is insane overreaction.

I concede the environment is weird and unsettling. I understand the concern. People worry about what will happen next. They worry about getting sick. About their loved ones getting sick. I appreciate how anxious people feel, but it's too much.

Here are some facts to finish. In Australia, as of yesterday, there were 709 confirmed cases of COVID-19 with 6 deaths. That's less than 1%. More people die in motor vehicle accidents. Last on the Australian Bureau of Statistics top 20 causes of death in Australia is melanoma which caused 2094 deaths in 2018. People are still driving, and exposing themselves to unsafe levels of sunlight.

I am not afraid. Regardless of what is happening around me, around Australia and around the world. I fear nothing because I am a sheep who follows the Good Shepherd. He knows my name. I know his voice, I listen and I trust Him.