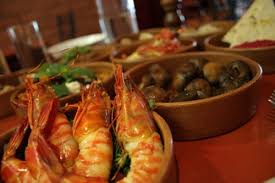 Let me begin with a confession: I thought moreish was spelled mawish. I even confidently told a student so. M-A-W-I-S-H, I said, is a synonym for hungry, as in I'm feeling mawish. Yes, shocking isn't it? Not only the wrong spelling, but the wrong definition. Upon realising this grave error-just now- I have determined that I am no longer fit to teach English as a second language, and I will therefore be submitting a letter of resignation on Monday.

The timing is most unfortunate though, as I am soon to be, if my

information is correct, made permanent, having been unwillingly retained as a casual employee for nearly a year. I learned this piece of good news last night at a work dinner held to farewell one of our colleagues who received a better offer, and rightly accepted it.


I chose the restaurant: a little selfishly picking one within walking distance of home, so I could have a few drinks. The restaurant was called Moorish-no kidding. What a coincidence right?

Not at all. The name of this terrific tapas bar and restaurant made me think of the word mawish, which I now know is actually spelled moreish and evidently does not mean hungry, but rather refers to food which makes you want to eat more of it. You know the feeling: you taste something and you love it and you have to eat more of it.

Moorish refers to the Moors (North African Arabs), so Moorish food is cooked in the style of this region. We had a four course tapas banquet which featured a succession of wonderfully flavoured and textured dishes. Everyone was pleased with the food. We had a great night. The place was packed, but the service was sharp. Read my review of Moorish cafe. An all round winner, and the inspiration for this celebrate post in which I was all set to play with the words Moorish and Mawish. Unfortunately, as I explained earlier, mawish is not a word, but Moorish and moreish still works as an example of a pair of homophones.

Homophones? I guess I still have something to offer as an ESL teacher. Perhaps I won't quit after all. Maybe I'l stay and enjoy being made a permanent employee, which effectively means a pay rise.

What do you think? Should I stay on? Have you eaten Moorish food? What food would you describe as moreish?
Posted by DA Cairns at 8:30 PM