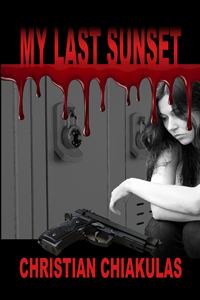 Christian will give one digital copy of My Last Sunset to a randomly drawn commenter.

Although it is not described in detail, this book deals with sexual
abuse.

An antisocial teen sets out to solve the mystery of why Jessica  Carpenter killed herself in the halls of their high school.

My Last Sunset is a hard-boiled detective story set in a contemporary American high school. Damon Riley is an angry, antisocial teenager with a penchant for solving mysteries.  His life is shaken up when Jessica Carpenter, a girl in the grade below his, shoots herself in the halls of the school itself, leaving behind a note that names him as the culprit for driving her to suicide.  Taking the bait, Damon embarks on a quest to find out what really happened to Jessica, leading him through a web of conspiracy, betrayal, and brutality.  Along the way he learns more than he ever dreamed possible about the girl he could never have saved. 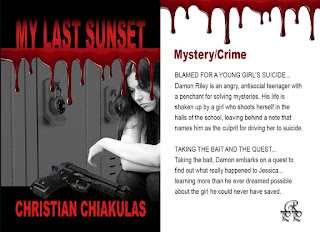 Michael might be having the same idea as me, because he says, "Hey, you hear about that freshman who killed herself?"

"She was a sophomore," I say, staring ahead at the blackboard.

"Oh," Michael says. He's a senior, so it makes sense he wouldn't know."

"Yeah, in the bathroom downstairs," I say. This class is on the fourth  floor. Jessica killed herself on the second. The music was so loud from the dance that nobody heard the gunshot, and she didn't get found until a janitor came in the next day. She'd been absent from school Thursday and Friday last week, and I heard her mom had reported her missing to the police. Then, for whatever reason, she came back to school to end her life.

What the hell, Jessica.

It's not that I can't believe it. Jessica was a nice girl, I think, and seemed happy a lot of the time, but seeming happy and being happy aren't the same thing; you don't have to be smart to know or even articulate that. Like I said, I didn't know her that well, but I knew her a little; enough to see that, like the rest of us, she had shit going on she didn't talk about. What I didn't see was that she was the kind of person who couldn't deal with it, like we all do.

Or that it was the kind of shit that can't be dealt with."Heard she left a note," Michael says, and now I'm aware that he's looking at me even though his face hasn't moved. His eyes moved.I didn't hear anything about a note. Whatever was going on with her, she definitely wanted to be found, wanted somebody to know.

Half a dozen more people stream in over the next two or three minutes; this class is pretty small to begin with and there are four absent. The eight o'clock bell rings just as Goldman appears in the doorway. Behind him is Panzer, one of the school's security guards (not his real name,
but it should be).I raise an eyebrow as Goldman enters the classroom and the talking dies down. Then he looks right at me and says, "Damon, could you please go with Mr. Cousins to the dean's office?"

A low "Oooooh..." goes through the small class, and I stand up, wondering what the hell I did. Usually when I'm in trouble, I know exactly why. As I cross the room to where Panzer is standing, arms folded across his chest, I notice the two girls who'd been in the room early shooting me nasty looks, like I personally wronged them. I don't even know their names.

Panzer steps aside to let me exit the room first then closes the door after us. I throw my messenger bag over my shoulder and look at him.

"What's this about," I say, a little worried.

The halls are deserted, and I stare at the floor as we walk to the main nexus where the stairwells are, passing over the blurry reflections of the fluorescent lights in the freshly-waxed floor. The dean's office is on the second floor, right down the hall from the girl's bathroom. I stare at the door as we pass it.

The dean's office is small, considering there are three deans that share it along with a secretary and the school's sole counselor. The hub is a yellow-painted room with the secretary's desk, several file cabinets, a large wooden conference table, doors to the private offices of the deans and counselor, and plastic bins hanging on the walls filled with handouts and leaflets about substance abuse, sexual abuse, good ol' fashioned domestic abuse, birth control, STDs, juvie, and there at the end— suicide.

The three deans are all sitting at the conference table along with the counselor, Mrs. Mullen, and the school's police liaison, Officer Pasture. A pit drops into my stomach. Whatever I did, it must've been
bad
.
"Damon, please sit," Dean Goodfellow says. He's a pudgy man with long blonde hair and a face like a bulldog; if you're picturing him comically, stop, because everyone in this school is terrified of him, including yours truly. The other two, Dean Haskins and Dean Washington, are serious men, but none attack their jobs with the rage-filled passion of Dean Goodfellow. He runs this school like it's the streets of Baltimore in The Wire, keeping detailed, ever-growing files on every student with the misfortune to cross his path and trading favors to some of them for information. I'm not gonna lie, I've gotten out of more than one detention this way. Wouldn't you know it, he's in charge of students
with surnames P-Z.

But they're all three here, which means this is really serious. I pull up the blue plastic seat across from him, willing myself not to break eye contact, and Panzer disappears outside. The secretary isn't here
either. I can feel my heart pounding in my chest. What's going on?

"Damon," Goodfellow says, shifting in his seat and locking his fingers together on the table in front of him. Everybody else at the table is staring at their laps; they know the drill. When Goodfellow is
working...interrogating, more like...you let him be. 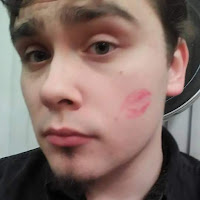