A Dog's Eye: It's not just a lawnmower, mate.

Once upon a time I bought a house and the purchase of that house necessitated many other purchases. A great number of those purchases related to home maintenance which is not a thing when you're renting an apartment. Not only is there no lawn to mow, but any repairs which may be required are the responsibility of the owner of the property - for better or worse. (Unfortunately many renters find agents and landlords to be very diligent when they want you to sign a lease, but significantly less so when the tenancy begins.)

There are many benefits to home ownership, but there are also increased costs and, let's call them burdens, but overlook the negative connotations of that word. I bought my first house twenty years ago. My ex wife owns and lives in that house now, and since our separation I have lived quite a transient life. I'm the guy who needs extra pages for all his previous addresses on mandatory police checks for employment purposes. Before I moved to Darwin five years ago, I racked up five different addresses in about eighteen months. During my time in the Top End, I had six permanent addresses, and for the eighteen month period in which I was a house sitter, I slept in nearly forty different beds. 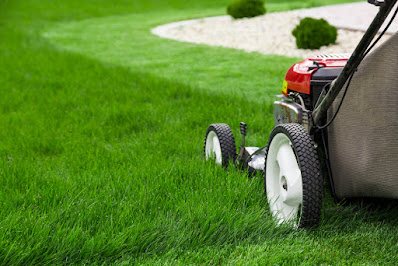 In all that time, six years now, I bought two lawnmowers. One, a brand new electric model and the other, five years after I got rid of the electric one because I didn't have a lawn to mow, was a second hand mower which I pushed around the yard in the tropical heat until it spat the dummy. The engine seized a couple of weeks before we moved from Darwin back to the Illawarra.

Since our return, we're already on our third address. This time, I'm hoping and praying that we can stay for at least two years or more, even until we are ready, God willing, to look at buying a home of our own. So keen am I to put down roots, I have come to see the lawnmower as a metaphor for commitment.

The house in which we are now living, and as I said, hopefully not leaving for some time, has a sizeable yard. Had we been more financial at this time, I might have considered paying someone to come and cut the grass. Firstly, to avoid having to do it myself, and secondly to avoid having to buy a lawnmower. Now don't get me wrong, I like lawnmowers and I like using them. Cutting the grass is one of those necessary chores which gives you exercise and an immediate sense of satisfaction once the job is done. It's not that I don't want to do it, it's just that I can think of many other things I would rather do.

I have a philosophy that getting older (I'm talking about the second half of life - post midlife crisis) is about reducing the 'have to' components. Many of them can be removed with a theoretically simple change of attitude, but others are about making wise choices. Choices aren't only facilitated by money, but whether or not you can afford to do something, or go somewhere, or hire someone to do something for you, is certainly impacted by your financial circumstances.

I tell you, if I was on a six figure income, I would pay someone to clean the house and cut the grass. However, limited money means limited choices.

So, I must cut my own grass which is certainly not the end of the world. Having made that decision, I then needed to purchase a lawn mower. I could have gone second hand again, but aligning with the 'lawnmower means commitment' metaphor, I knew a second hand mower wouldn't last as long as new one. It would also be louder, dirtier, and harder to use. I decided to show that I was in for the long run by buying a new lawnmower. The problem was, I still had a tight budget. After a brief search online for mowers I could buy at bricks and mortar stores, I was not happy with the prices, so I turned to old mate Amazon. 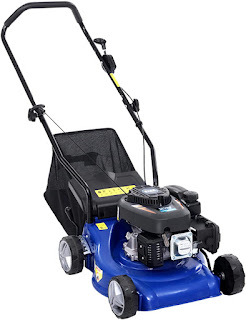 To cut a long story short, I spent a total of just under $300 for a no name brand mower built in Taiwan, where I'm pretty sure there aren't many lawns, and a jerry can, funnel, and a bottle of oil. In just over a week a big box from Amazon arrived at my door and three days later I unpacked and assembled my new toy.

It's beautiful looking machine, was easy to put together, easy to start, easy to use, it's quiet, and it did a great job. Although I was hot, sweaty, and in pain from a pulled buttock muscle, I gazed upon the finished lawn and smiled. I'll do that every time I cut the grass, even though some days will be much hotter, and I won't feel like it when I start.

I bought a new lawnmower, but it's much more than just a machine to cut a grass. It's a metaphor for commitment. I'm all in. A long term determination to make a 'have to' task, a joyful one and one for which I forego complaining to express gratitude.